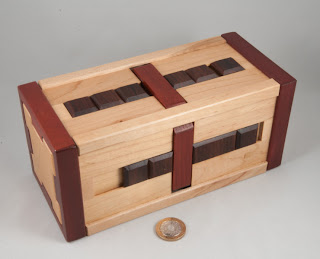 A.K.A. the Clutch Tile Puzzlebox, this is another pretty unique Stickman puzzle – one part sliding tile puzzle , with a twist, two parts secret opening puzzle box and a bonus Lee Krasnow burr thrown in for good measure… it’s one heck of a puzzle.

Stickman Puzzlebox #4 was first offered for sale back in 2004 as a collaborative effort between Rob and Eric Fuller (and Lee Krasnow if you include the mini-burr hidden inside). Each of the four long sides of the box has a channel running the length of the side with a number of sliding tiles trapped in the channel. Those channels are interrupted in the centre by a rotating square collar – free to rotate in either direction … for as long as you like …hmmmm, therapeutic …

Examining the collar a bit more carefully, you’ll spot a pair of holes on opposite sides that should just accommodate a tile in each and provide a mechanism for moving tiles between channels – as soon as you work out how to get the tiles in there in the first place. 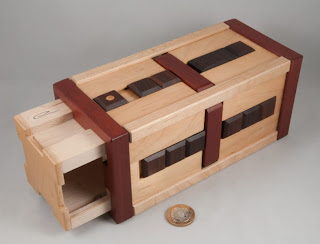 Once you’ve done that, and spotted the clues to which tile you might want to get where, it’s all down to working out a strategy for how you can make spaces where you need them and have the right tiles “available” to be moved into their eventual resting places…  which isn’t all that tough, except that our friendly puzzle designer has included a few double-sized tiles which severely restrict the options open to you on some channels. Think a few moves ahead and you can work around them as well, though…

…and once you’ve got everything to where you think they need to be, there’s one last little killer move to get the drawer to open… one that evaded me for quite some time! Once you’ve got the drawer open, there’s a latched cover over the top of each drawer to stop anything in the drawers getting in the way of the insides – neat! 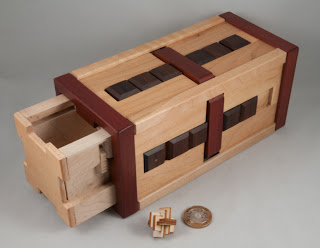 One of the drawers has a cute little surprise in the form of a Lee Krasnow miniature laser-cut burr – mine’s a little 6-piece offset board burr – a nice little reward for having solved the puzzle.

What else can I say – it’s a piece of Stickman history and with nine years on the clock it still looks absolutely perfect and everything works precisely as intended, but then it’s a Stickman- would you expect anything less?