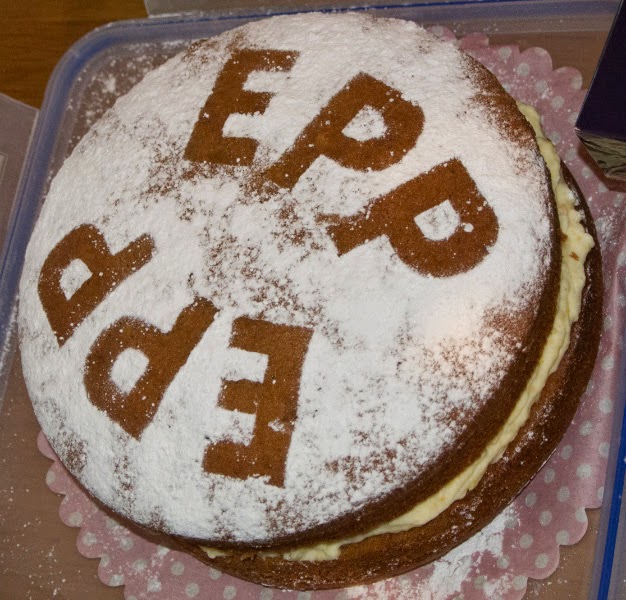 Peter Hajek’s usual End of year Puzzle Party was slightly delayed last year, so instead of happening in 2014, it took place just into 2015 – on the first Saturday of the year, in fact. The premise remained the same – puzzlists are invited along to Peter’s for an afternoon of socialising, puzzling, food and short presentations as everyone presents their 3 best-puzzle-finds-of-the-year for 2014.


This year the weather wasn’t too bad so I chose to drive down to London and gave Chris a lift down… so we got to chat largely about puzzles for an extra few hours. In spite of having driven down to Peter’s place before, I still managed to take a wrong turn at one point and gave the sat-nav an extra little work-out … it still got us there in the end, although we ended up approaching it from a totally different direction.

We were greeted at the door by some fellow puzzlers and bumped into Peter a short while later in the kitchen when I was trying to offload the EPP orange cake and some nibbles for the assembled masses. It didn’t take very long for the puzzling ranks to swell and pretty soon there were several knots of puzzlers scattered between the study, kitchen, conservatory and the lounge.

As usual there were several crates of puzzles scattered around the conservatory looking for a new home – some of them had a clue to their current owner and several people spent a while trying to hunt down the current owners in order to strike a bargain and re-home a spare puzzle or twelve.


Wil Strijbos had a selection of his wares available and I took the opportunity to pick up a prize for Nick Baxter for winning my Christmas competition (a checkerboard burr-in-a-box and a limp key lock, if you’re still interested).

Steve and I had a chat about his latest experiments with 3D printing Derek Bosch’s Helical Burrs and a little project he’s currently working on – if it works out you’ll be able to read about it on the blog in due course … if Ali survives the finishing process, that is! [He’d maimed himself on one of the early parts…]


Oli and I spent ages chatting about a crate-full of impossibility that he’d brought along…he’d been hoping to offload as much of it as possible and when he was having trouble coming up with suitable prices for some of the rather unusual items, he asked Wil’s advice on the prices – ever full of mischief, Wil promptly announced that they were free and waltzed off. Oli had been dishing out all sorts of impossible bits to the assembled puzzlists for free, but as I was interested in a bottle or two as well, I wasn’t going to accept Wil’s rather favourable pricing strategy for Oli. We haggled for a while, with me suggesting a price and Oli insisting on arguing me down(!) before I ended up coming away with several impossible bottles for a price that I frankly found a little embarrassing…

David Singmaster was giving away copies of a 3D two-piece symmetry puzzle he’d recently rediscovered on his bookshelf and Tim Rowett made sure that everyone got a little goodie-bag of delights.


When everyone had arrived, Peter herded us into the lounge for the presentations and we all took turns presenting our best finds to the others…in alphabetical order … sort of…


As usual there was a brilliant spread of puzzles and listening to everyone else’s talks it was clear that quite often, the choice was due not only to the puzzle itself, but also due to the circumstances of the acquisition or where it came from. 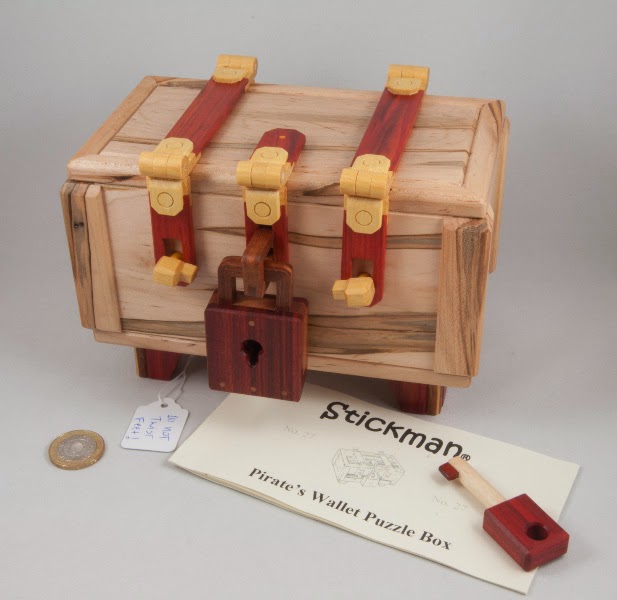 
Robert Yarger’s latest creation is a sequential discovery puzzlebox in the shape of a little pirate’s chest with a wooden padlock on the front of it. From start to finish, nothing is what it appears to be and some rather useful tools are either beautifully hidden or rather well-disguised. The multiple layered solve provides a number of discrete stages, each with its own wonderful “A-Ha!” moment. Beautifully made (as always!) with all of the mechanics on display when fully solved.


Jointly designed by Jack Krijnen and Goh Pit Khiam, Power Tower is a major step forward in n-ary puzzle design. The design allows puzzlists to not only alter the number of sliders (anything from three up to six) but also to mix and match pieces with different bases at the same time – producing some very interesting, often confusing, solve patterns. An absolute delight for any fans of n-ary puzzles.


John Moores’ stand-out exchange puzzle from IPP34. Jointly designed by John, Junichi Yananose and Brian Young, this sequential discovery puzzle is classic Mr Puzzle goodness. Lots to discover along the way and some truly ingenious uses of unusual objects. Broadly divided into two main sections, the solve presents a number of excellent challenges, with puzzlers often realising what they want to do but being totally befuddled at how to achieve it – resulting in a few really special “A-Ha!”s … the last one’s a fitting climax!

I really found narrowing my choice down to just three was embarrassingly difficult given all of the wonderful puzzles I managed to add to the collection in 2014. Perhaps Nick Baxter had the right idea of selecting three and then giving a couple of others a shout-out at the end.

In all 70 puzzlists from 15 countries contributed to this year’s EPP booklet (available electronically to everyone who takes part… so if you need a reason to contribute next year…) and 16 of us presented our favourite finds in person at Peter’s place.


It turned out that 11 people had selected Big Ben making it the single most coveted puzzle of 2014 – I know that would have put a smile on John’s face. Brian Young was the runaway best designer of the year with a total of 21 nominations thanks largely to Big Ben, Katie Koala and his Gold Coast Parking Meter from 2007. Robert “Stickman” Yarger picked up 16 nominations – particularly impressive when you realise that his puzzles only appear in limited runs once or twice a year.

After the presentations there was time for some more relaxed chatting and playing before Peter declared dinner ready and we all trooped into the kitchen to load up on food from the table groaning with food of all sorts.


Gee Mahabir treated us to a short set of magic while we were finishing off our dinner – hopefully Katja didn’t mind the cutlery mangling demonstration too much! After dinner there was an informal gathering upstairs in the puzzle room, with various treasures coming out for a play… Chris and I spotted a pile of disassembled puzzles on a shelf and decided they should be reassembled – so I tried one or two of them and largely failed, but Chris and Ali managed to get a few of them restored to their familiar shapes… much to Peter’s delight since he reckoned some of them had been disassembled since he’d got them many many years previous.


Another brilliant day with fellow puzzlists from round and about…Thanks Peter!
Posted by allard at 21:48