Unfortunately this year my Karakuri Christmas presents took a bit of an extended detour via the Her Majesty’s Revenue and Customs so they didn’t quite make it in time for Christmas… but that doesn’t mean I wasn’t puzzling away on Christmas day!

I’ve written about how the whole Karakuri Club works in the past, so feel free to have a look back at the previous write-ups over here or here if you’re still wondering how it all works. From memory their prices have remained pretty much the same for the past few years and I reckon they’re still excellent value for money – as long as you don’t mind the lucky dip element: you won’t know what the puzzles are until you open the package… you can select the craftsmen you want, but they get to decide what they’re going to make for Christmas. 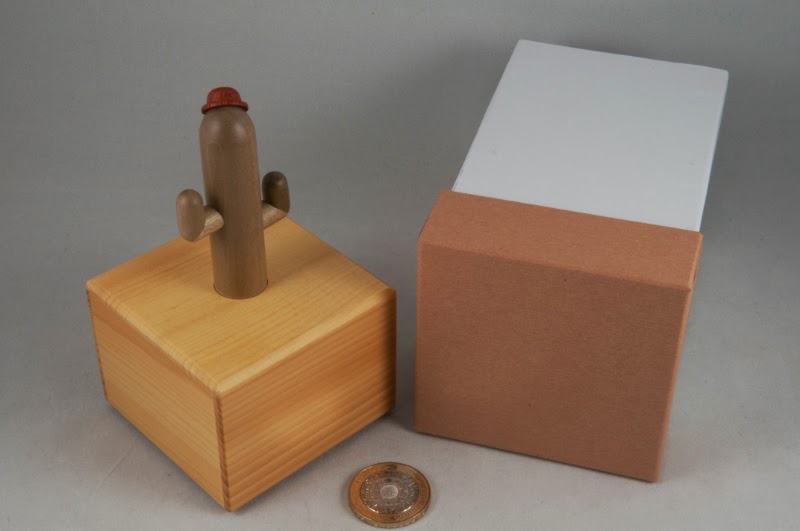 This year I got six Christmas presents from Japan. Five from established craftsmen I knew I’d like and one from a relative newcomer who’d produced the Old TV earlier in the year. The TV had been really unusual and I’d seen it stump several seasoned puzzlers for quite a while so I added Kasho to the list this year…

Kasho’s puzzle box was a rather quirky-looking cactus plant with a hat, called Tequila … happily it’s not a terribly difficult puzzle so you shouldn’t find yourself driven to the bottle for inspiration. It only takes a couple of moves to open it and you’re probably going to go straight for the locking mechanism without much experimentation – definitely not much of a challenge, but a funky looking puzzle! 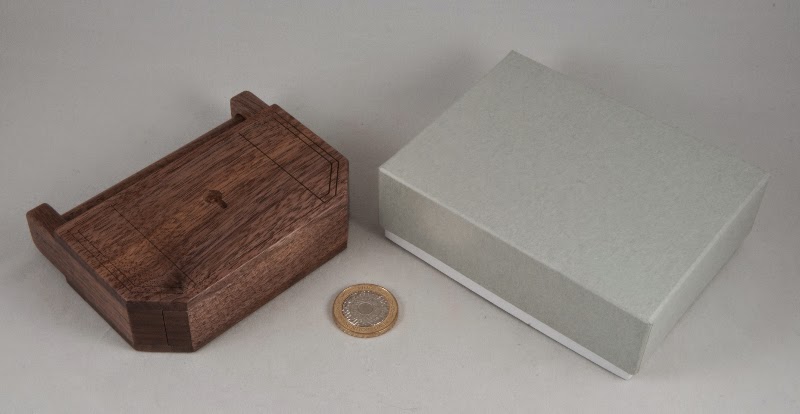 Tatsuo Miyamoto brought us a puzzle box in the shape of an antique wooden Lock – once again the mechanism isn’t particularly complicated, but the workmanship does mean that you won’t spot it straight away – once you do though, it’s pretty much game over with a little drawer popping out immediately. 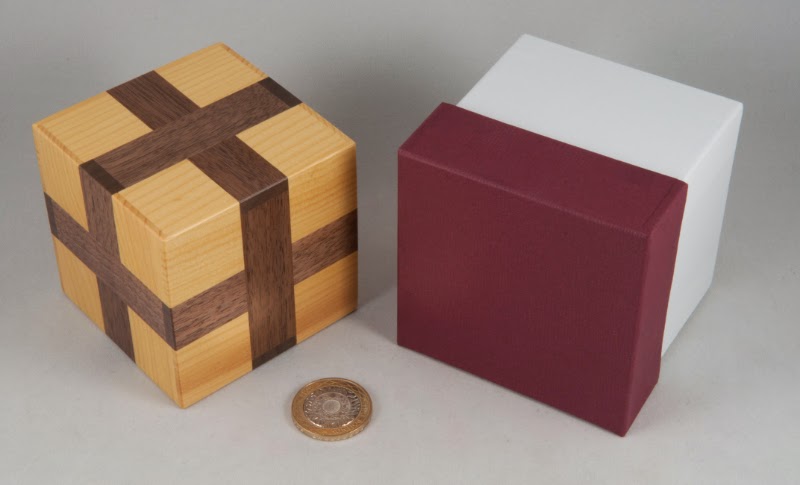 Kamei produced an interesting variation on his parcel cube series from the 1990’s with New Parcel Cube. It looks a bit like the old parcel cubes in that it’s a cube with a set of bands around the sides. Whereas the originals had bands that stood proud of the cube, the new version has darker bands that are flush with the surface of the cube … and a little thinking might give you some ideas as to how to get the mechanism started. I found myself taking a little while to work out the right grip, but then I’m a bit slow sometimes … and you might be interested to know that there are two compartments to find … one thing that really struck me about this puzzle is the superb fit – some of the pieces will go together in various orientations, and if you deliberately change their orientation as I did, the final fit is still absolutely perfect … gosh! 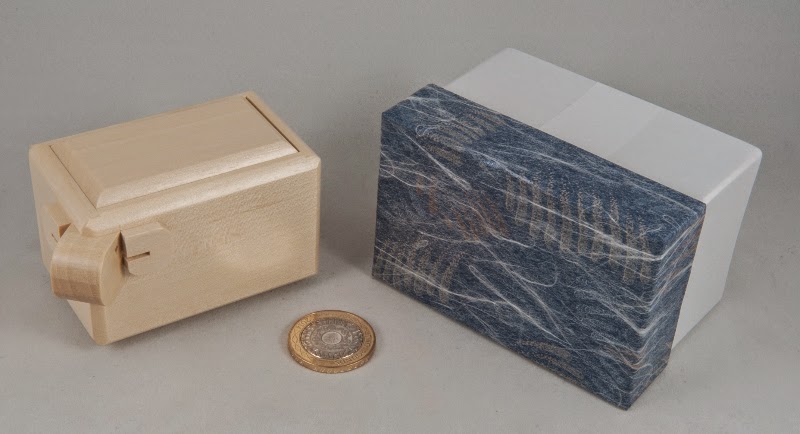 Shiro Tajima produced a rather cute looking Sheep. It's clearly a box, and something is obviously going to happen with the belly and the back of this little beastie, but it has a tricky little mechanism to keep things locked up.

Once you find the first move, you'll be shown a little of what's going on inside, but until you work out what you can see in there and how to use it, this little box is going to remain firmly locked. It's a bit fiddly and won't reward clumsiness, but a deft touch will have it open in seconds.
Hideaki Kawashima continued his tradition from last year and produced another Ring Box (no. 3). The first one wash reasonably straight forward and the goal was really to open the box. The second added a great trick to stop you from removing the ring, allowing you to get into the box reasonably easily. This year took the previous puzzle and made it a lot harder … and this one took me by far the longest to solve … I had it out next to where I usually sit to watch the telly and I’d pick it up and try various things each evening – generally to no avail. 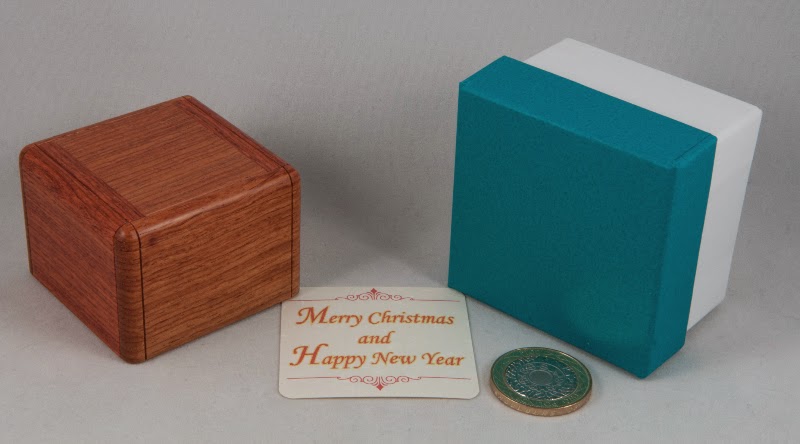 Now, I wouldn’t be spoiling anything to tell you that the box comes with a little card telling you that the goal is to remove the ring from the box … opening the box is pretty straight-forward – there isn’t even a trick to it – the lid is just very well made and virtually invisible to a casual inspection. Once you’ve opened it you’re greeted with a silver ring nestling in a standard ring-box insert – except this one’s thoroughly locked in place! Fiddle around with the box and there are clearly things going on inside there – but it’s hard to tell if it’s a ball bearing or a metal bar in there – one thing you can tell is that working out how to release the ring is non-trivial … so I spent ages fiddling with it over the course of a couple of weeks.

Every now and then I‘d get a call from one of my puzzling mates who’d ask if I’d solved it yet, and we'd commiserate about the fact that we still hadn’t got the ring out … and then try some more…

One evening I had a call from James asking if I’d solved it yet and then he told me that he’d buckled and had a look at the solution which had just arrived … but that didn’t seem to make sense, so he phoned a friend and between them they managed to work out it, he refused to give me any hints and told me that I’d like it, so I picked it up again and set about things a bit differently, and this time I found the solution, and James was spot-on – I do love it! It’s a brilliant progression from the first two, and I’m not ashamed to say I was totally suckered by it! 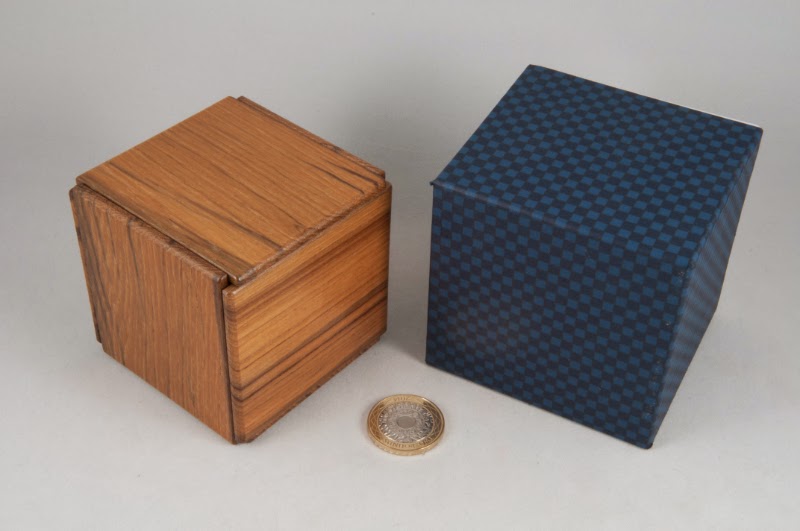 Last but not least, Hiroshi Iwahara brought us Confetto Box 2 – all the goodness of the original Confetto Box, with bells on! Having only recently got a copy of the first Confetto Box, I probably had a bit of a head start on solving it, but it was easily the most complicated of this year’s Christmas presents. Finding the first panel to move isn’t that much of a challenge, finding the next one is rather tricky, and then it only gets harder…

Once you think you’ve worked out the rhythm, it throws you a massive curve ball, and the opening the lid requires understanding everything up to this point and noticing something interesting along the way … get it into the right state and you’re rewarded with a panel that can be removed and a view of the innards – definitely the most complex of my haul of this year’s presents and definitely worth a punt if they come up for sale in the future… 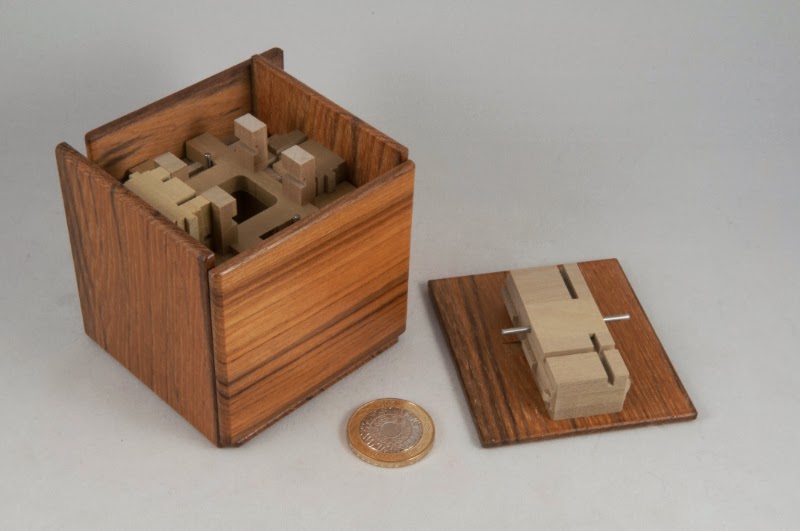 So how would I rate this year’s haul? For me there are a couple of fairly simple puzzles that won’t hold up a dyed-in-the-wool puzzler for very long… a classic re-make with a twist, a really unusual looking tricky little box, a brilliant variation on a theme and a terrifically complex puzzle that’s fun to work through… all told a great haul!