One of the col things about being a member of the Karakuri Club (apart from the Christmas presents!) is that you get notified of all of their new offerings and often their newest puzzles are only available to Club members. 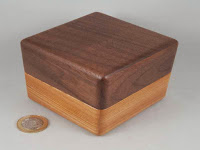 Recently I picked up a couple of rather neat new boxes from them…and a one of their work kits that I’ve been meaning to try out for absolute ages (although that came via Satomi at CU-Japan).
Akio Kamei’s Rotary Box II is a big solid hunk of puzzle box. It’s not light and you’d be forgiven for thinking that it either didn’t have a lot of space inside it, or it had quite a bit of gubbins in there…
It looks pretty plain, if rather neatly finished off on the outside – the rounded edges give it a nice feel with the two halves in contrasting woods giving you a very clear steer toward how the box is likely to come apart – either that, or a very strong piece of misdirection! 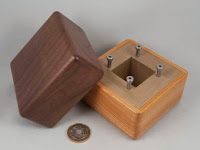 Early experimentation with the box didn’t yield much at all, in fact it’s all rather securely locked up until you try something a bit unusual, and a bit bold, and soon enough you find the first of two compartments…finding the second is a bit more tricky and as with quite a few of these puzzles, if you didn’t know there was another, you might completely overlook the existence of a second compartment […and that’s why I put a couple of Japanese coins in the second compartment…].
Once you do find it, you’ll enjoy how opening each of the compartments is linked – yet so easy to overlook.
It’s quite an unusual Japanese puzzle box, not overly complicated but reasonably satisfying. 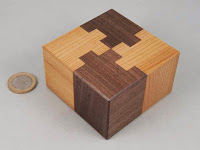 Next up is the latest offering from Hideaki Kawashima, enigmatically titled Half (J) – I’m afraid I haven’t worked out the significance of the name yet. This one appears to be made up of four interlocking puzzle pieces in contrasting colours – with no obvious way for them to come apart.
A little experimentation will generally result in a rather magical movement beginning – and once it does, it dawns on you that that would have been the only way that things could have moved without contradicting one of Zeno’s paradoxes, or Pauli’s Exclusion Principle, depending on what you read. I just loved that motion and really enjoyed the second part of it… which then reveals the two compartments, right where you’d expect them to be. 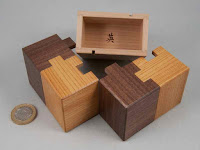 As far as move counts go, this box is probably about as low as you can get, but the movement is really delightful and surprising, to the extent that I’ve found myself randomly reaching for it on the desk and working it backwards and forwards just to put a smile on my face – it works every time!
Love it! 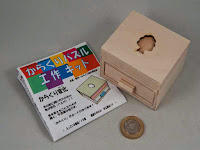 Last up is a Karakuri work kit called the Ninja Box. I chose this one because it’s only available in kit form, so unless you build one for yourself, you can’t have one…
A couple of my puzzling mates have tried the Karakuri kits and enjoyed putting them together so I reckoned it was about time that I joined their ranks… I ordered one from Satomi and the little bag of wooden bits duly arrived along with a wonderfully detailed set of instructions – in Japanese.

Now I realise this will come as a surprise, but I’m not fluent in Japanese – and I certainly cannot read Kanji (or any other form of Japanese script for that matter!). Have no fear, the instructions come with some wonderfully explicit diagrams – that show all the details perfectly, including where to put the glue so that you don’t gum up the internals… while I might be missing some of the nuances of the instructions, you can definitely make do with just the pictures!

I cleared a small spot on the desk over the weekend and set about assembling the little guy – the instructions really are wonderfully clear (even without understanding the text!). The pieces are all perfectly cut and notched so they go together really easily and a bit of masking tape holds things together rather effectively.

I attacked it in a few spurts, assembling various bits and taping them up before going back to my current second job, aka The Book.  A few hours between each sub-assembly allows the glue to dry properly before adding the next layer and repeating the whole cycle.

A couple of minutes with a bit of sandpaper removed any extraneous traces of glue along the way, but apart from that, the kit literally just needs gluing together… the Karakuri guys have done all the hard work for you getting the bits all cut perfectly to size.
I rather enjoyed putting it together and I now have a neat little Ninja Box to add to the Karakuris in the cabinet…sure it’s not quite as pretty as their productions, but I made it. :-)
If you are thinking of having a go at one of their kits, go for it – the pieces are all spot-on and the design is pretty much self-jigging so you’ll end up with a box that works, even if you have a few too many left thumbs.