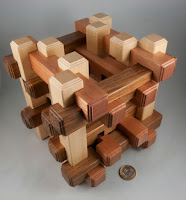 ('cos invisible ones are hard to photograph)

The universe has a strange sense of timing…

A while ago I managed to snag a single item off Nick’s auction – a copy of Bill Cutler’s Visible Burr. It had been made by Brian Young as a Limited Edition back in 2005 when he produced 30 copies.


Now it’s fair to say that I hadn’t been paying particularly close attention to the listed dimensions on the auction listing so I was a bit surprised when it arrived … it is large! And very Mr Puzzle-y – the woods instantly give Brian away, and the finishing at the end of the pieces should probably be a Mr P trademark by now… and if there was any doubt at all, he’s branded it with his logo.

Right, so said puzzle has been staring at me from atop my cabinet for a few months now as I haven’t had much time to play with puzzles recently… guilt growing by the day.

…then a couple of weeks ago Eric Fuller announces a new set of puzzles available for sale, and one of them is none other than Cutler’s Visible Burr, and I can’t stop myself from ordering one, so soon enough I have a second copy mocking me while I’m not puzzling… this one’s disassembled as Eric was charging an assembly fee for this one (and having now played with them, I know why!).

Seeing as how is was a long weekend I decided to give myself a day off to play with puzzles, so I ended up spending the best part of the day assembling and disassembling a pair of Visible burrs… and it was great! 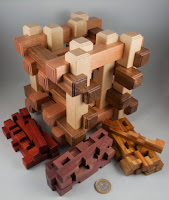 Let’s start at the big end – Bill Cutler designed Visible Burr to be a disassembly challenge and deliberately made all of the notches in the sticks visible, even when it’s fully assembled – so by inspection, you should be able to deduce how to dismantle this 24-piece monster.  You effectively have a 12-piece burr trapped inside a 12-piece cage, so examination of the inner burr will show you which pieces can move where…

…and at this point you might notice something interesting – there’s a lot of sticks that can move at most points in the solution – only some of them are useful! You will find yourself wandering down a lot of blind alleyways if you don’t examine carefully and think a few moves ahead. (Or you can just play, experiment and fiddle around if you don’t mind going backwards and forwards a bit – which is my preferred approach!) 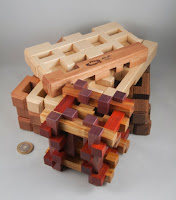 The first piece needs 7 moves to release it, with the next following along after another couple of moves. Release a few of the inner pieces and you’ll find you can start removing cage pieces too … and then carnage prevails as pieces start flying off left, right and centre. (I have a vivid imagination, stay with me!)

Keep on going and I have a large pile of large sticks. Yay. (What the hell did you do that for?!)

OK, now we pick up the smaller sticks form Eric and set about building that into the same sort of structure… now the three type of wood really help things, as does the fact that the frame pieces are all identical – which means the only real challenge is the 12 internal pieces – the rest is just about timing, timing and dexterity – did I mention you’re wrangling 24 pieces? 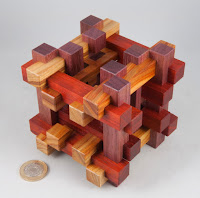 Now at this point, dear reader, I shall not insult either your intelligence or my imagination by suggesting that I put it back together unaided – I fired up my trusty copy of BurrTools and spent many pleasurable hours building a suitable model of the monster… so I now know that the complete model consists of 7868 voxels(!) – think about that before you chastise me for using software – that was a labour of love!

BurrTools found a suitable solution in mere seconds, but it took a lot longer than that to actually build up a copy in the real world… oh and then there was the reassembly of the big bugger as well.

So I started the day with an assembled giant copy and a small set of sticks, halfway through my day I had a large pile of sticks and a small Visible Burr, and at the end of the day, I now have a reassembled monster on top of my cabinet looking down on my with grudging respect and a neat little copy in the cabinet on the Fuller shelf… a good day’s puzzling all round! 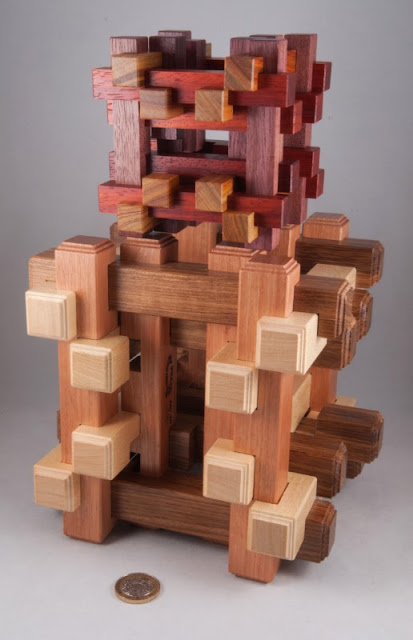