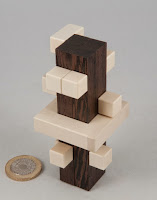 Eric Fuller has found some rather unusual looking puzzles to make recently – you can read about his Chicken on Jerry’s blog over here, and Kevin’s over here… no sense me telling you about it as well…

There have been a few other rather unusual and intriguing offerings that don’t look like poultry, take Tom Jolly’s Bundle of Sticks for instance… made to look like a – you guessed it – bundle of sticks. This assembly / disassembly puzzle consists of four sticks with some rather well-placed protrusions (thorns perhaps?) that interfere with the ring that holds the bundle together.

When you start this puzzle those thorns are arranged in a neat semi-symmetrical pattern around the sticks with the ring smack bang in the centre.

Removing the first piece is not a challenge – it’s a key-piece and simply slides out under the force of gravity… removing the next piece is far more interesting!  That takes 13 moves… and even removing the second last piece takes another six moves.

With the simple ring around the centre all of the pieces are pretty much in view all of the time, so you can plan a route to get things out of the way. A couple of the pieces have caps on their ends which cuts down on the possibilities for movement in a few of the orientations, but even still, working out how to align the pieces in order to make progress isn’t a horrible challenge in spite of the puzzle’s level.

There are one or two potential dead-ends, but they don’t trap you for long…
I really enjoyed this puzzle – it’s a great design from Tom and Eric’s done a lovely job of bringing it to life in holly and wenge, so it looks brilliant! […and rather unusually, as I’m writing this, there are still five copies available for sale!] 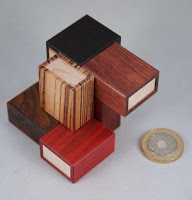 Next up is a variant on a puzzle that has a lot to do with why I really enjoy collecting mechanical puzzles: Matchbox Play Six is a variant of Oskar’s Matchboxes – the topic of my 6th blog post (this by contrast will be my 377th post...) and one of the puzzles I blame for my thoroughly irrational love of beautifully handcrafted puzzles.

While Oskar’s design has 5 interlocking matchboxes and can be a fairly tricky puzzle, Olexandre Kapkan’s version has six matchboxes that separate naturally into three mirrored pairs. Eric’s created them in a bunch of different exotic woods and calling it a beautiful puzzle does not do it justice. It is gorgeous!

It is great fun to experiment with and even muggins has managed to find a few solutions on this variant – from pretty compact to a big loop – a very cute variant on a classic Oskar puzzle… and it looks brilliant next to the original version!

Last puzzle for today is Uri Three Bars designed by Dario Uri. Eric’s made these with wenge legs and maple caps – a nice contrast. The object is to intertwine the three pieces so that they meet with the three caps all together…which would be simple if there weren’t bumps and grooves on the legs along the way. 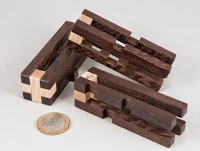 Those bumps and grooves mean that sliding any pair together so that the caps meet is reasonably easy with a little manoeuvring – but introducing the third piece requires some backtracking … if you’ve chosen the right two to start with… if you haven’t, no amount of manoeuvring will help you.

Eric shipped these puzzles disassembled, probably just to avoid damage, not to make it harder for puzzlers.  No, I’m sure he didn’t… (nope, I’m not convinced either!).

After a little fiddling around I thought about putting the pieces into BurrTools for some, ahem, assistance… only to realise that without know where the bumps and grooves would be on the solved puzzle, I was going to have to use a lot of variable voxels and it might actually end up taking longer than solving it by hand… so I went down the manual route… and delighted myself by solving it without having to spend absolute hours on it. 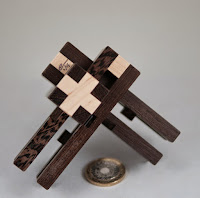 I probably got a little lucky, because finding which two pieces to start with and then when to introduce the third piece (that’s a long way from obvious!) didn’t take too long… and finding the path through to getting all the caps together was a great reward. 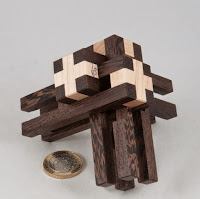 Having solved it, I put the completed puzzle into BurrTools and lo and behold, there is a unique 11-move solution… and knowing from Eric’s website that it’s a level 10 puzzle, you can deduce that introducing the third piece happens pretty early on in the process!