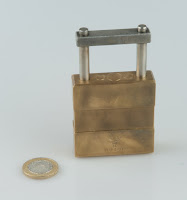 About three years ago I was lucky enough to get to play with Wil’s copy of Rainer Popp’s T1 Tricklock at his annual Queen’s Day Puzzle Party… since then it’s found its way to a new owner across the ocean who seems fairly chuffed with it.

It’s been on my “Gosh wouldn’t it be nice to have a…”-list for quite a while, but having heard rumours of the prices they’ve been changing hands at recently (yes they do, occasionally, change hands, privately) I’d more or less given up on that until I won the lottery… and then recently it seemed I’d won the lottery – not literally! But figuratively… in that a friend recently found one for sale and offered it to me – I won’t tell you how long it took to say “Pretty please!” and “Take my money!” but it had arrived at Puzzling Times HQ a few days later…

…and it’s every bit as awesome as I remember it being three years ago! 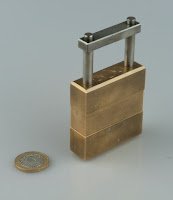 This copy looks a bit different as the shackle is made up of straight metal parts rather than the customary rounded stainless steel shackle on the later copies. It’s marked as “T1 001-333” although I’m pretty sure that there weren’t 333 copies made of this one – in fact someone who should know, suggested it was closer to just a tenth of that.

It’s a big, handsome lump of a puzzle with no apparent keyhole (or key for that matter!) and the shackle appears to come almost out of two holes at the base of the lock. There are a couple of interesting buttons located around the sides and some remnants of filled holes where the innards have no doubt been inserted, but apart from that, there is no apparent obvious place to start trying to open this thing. 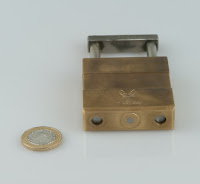 A fair amount of experimentation will lead to something unusual and probably rather interesting, although your brain will almost certainly stop you from making any progress at all at this point – it knows what’s possible and what isn’t – unfortunately the next move is somewhat impossible and is for me, the most charming thing about this lock – if you’re thinking, you’re stuffed! :-)

Find that wonderful next move and then things really start to open up for you – all of a sudden you’re spoilt for choice, but finding the right thing to do next is, once again, a fantastic challenge – there’s another lovely little piece of theatre just before you head into the end-game… where you’ll need all your wits and senses, you’ll need to examine everything super-carefully and then work out what you haven’t used yet before you can finally perform the final sequence of steps and find the shackle is freed. 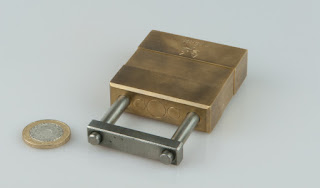 You should be warned that while this lock may have become somewhat legendary due to its limited numbers and tremendous scarcity, and the fact that Rainer’s gone on to create another nine awesome puzzle locks in his series so far, it’s not universally loved – some people have found it too hard as a puzzle to be entertaining – and I can see their point to a degree.

Solving it the first time, it is a pretty brutal puzzle – subsequent solves, if you keep your wits about you, shouldn’t take more than a couple of minutes, but you do need to be pretty exact when you’re executing some of the moves… and some copies seem to be less inhibited in some respects which make choosing the right spots a little harder!

Me? I love it – as a puzzle and as a beautifully hand-crafted object…
Posted by allard at 22:01