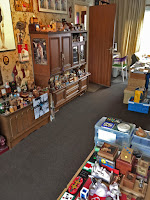 I consider myself rather privileged to be invited to Wil’s annual King’s Day Puzzle Party. It’s a wonderfully relaxed gathering at Wil’s house attended by some talented magicians, some gifted puzzle designers, several puzzlists, and, dare I say it, quite a few friends.

As usual the weekend started with a short flight to Schiphol followed by a leisurely 150 km train ride toward the south, where Louis, Shane and Mieke met me at the station. We had a lovely lunch with the assembled Coolen-clan before the majority of them jetted out on holiday. (Louis would subsequently be teased with glorious shots of the beach and the facilities at their hotel in the sun for the rest of the weekend while we were “treated” to what was apparently typically Dutch weather… although to be fair, Shane and I were describing it as typically English weather – so much for the grass being greener and all that!) 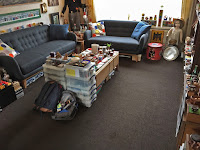 We spent the rest of the afternoon around the Coolen’s dining room table taking turns admiring Louis’ superb new puzzle cabinets (WAY better in the flesh than in the pics I’d seen!) and plundering them for puzzles to play with…

At one point I spotted a copy of Roy Leban’s Librarian’s Almanaq that Louis had clearly already started having a go at – the clue was in the fact that several pages had been torn out of it! I had a copy at home and had been waiting for the right occasion to have a go at it – knowing that I’d need the help of several good puzzlers and many spare hours, strangely that opportunity hadn’t presented itself yet!

Soon the three of us were clambering about on the floor piecing pages together with the occasional loud “A-Haa!” when one of us spotted a useful combination of pics and produced a set of phrases we thought might actually work. (The first puzzle consists of 64 pages with three drawings on each that need to be arranged into a square where adjoining pictures clue a word or phrase… mostly in American… so it took us several hours!) 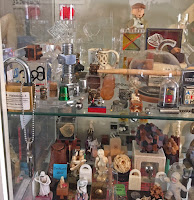 From there the instructions suggested there’d be an obvious answer… only there wasn’t from where we were sitting… so we pondered and we posited, until a little while later from across the room I yelled “It’s Spartacus!” – actually I didn’t yell that, I yelled something else, but it might actually have been correct, so I’m not going to mention it in here in case that spoils it for anyone who hasn’t completed this epic set of puzzles…

Next morning we hit the road east and arrived a little earlier than we should have at Wil’s place – just after Jan Willem. Sensing an opportunity that would never present itself again, I took a couple of quick snaps of Wil’s freshly tidied lounge with nobody in it – the weather was still pretty Dutch and there are usually around 20-30 people at Wil’s parties so it was going to be rammed with people. 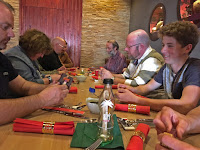 We settled down for a quiet chat over some coffees before the hoards arrived and somewhere over the course of the next hour or so the scene changed from a quiet chat with friends to a bustling full-blooded puzzle party.

[Before the hordes arrived Wil presented me with a well secured bottle-shaped package that rattled a little... some preliminary investigations yielded not a lot, so I passed it to Louis who determined that it should be unshrouded, so he coaxed it out of it's covering - and there followed a good few guffaws... and I'll explain them in a subsequent blog post - Wil's created a wonderfully apposite puzzle that chimes perfectly with a meme doing the rounds among some puzzlers at the moment... stay tuned.] 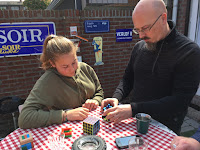 I’d taken along a couple of cube assemblies from Rich Gain and goaded a few folks into trying them… Coronation Cube tended to have more success than the Printable Interlocking Cube #4 for some reason… yet stacks of folks seemed to enjoy playing with them throughout the day – and indeed the evening, when we headed to the local Chinese restaurant for dinner.

Michel had brought along a couple of recently 3D Printed puzzles from some old designs and I particularly enjoyed his puzzle consisting of three pairs of semi-circles with the instruction to make a symmetrical shape… cute puzzle! 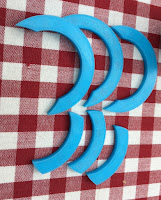 Somewhere around lunchtime the clouds parted and the sun came out and a lot of people migrated outdoors into the back yard where plenty of café tables made puzzling easy. Wil laid on an absolutely incredible spread for lunch and I think we all feasted, and whenever it looked like provisions might be running low, they were magically restored.

Oskar set up a table full of his latest jaw-dropping creations - including a set of three huge (think vase!) skeleton twisties, each of which had a slightly different axis of symmetry, which made them all behave totally differently. Oskar tried to explain them to me and I tried (hard) to follow, but his mind is just so far ahead of mine that it wasn’t really a fair fight! They look awesome and their movements look fascinating… although with the different sizes and shapes of pieces, they look like they should be hopelessly bandaged – and yet they aren’t…

Everyone spent a while raking through Wil’s crates and taking out the odd thing or two to purchase… and we didn’t hold back on that front… although there was a funny moment after dinner back at Wil’s place when someone asked him if he had a spare copy of Casino and he said “Of course, in the crates at the back door” – at which point the three amigos looked at one another and realised there were two entire 5-foot stacks of crates that we hadn’t even looked through yet! … guess what happened next?! 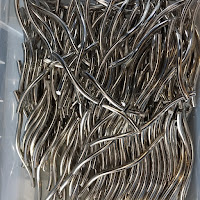 Invariably some of the crates contain works-in-progress, so you might find a crate full of little angels, or, as I did, an entire crate-full of High Five pieces – made for a great picture!

As we were leaving, Louis asked if I’d spotted my sign and I had to admit I hadn’t seen it, so he had to show me what Wil had done with one of the signs from our last MPP… seemed fitting somehow! 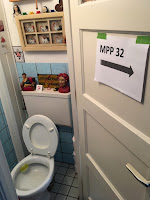 Sometime around midnight we hit the road back to Eindhoven, entertained by some impressive lightning in the distance while the rain lashed down – in a rather Anglo-Dutch manner… back at Louis’ we crashed before heading our separate ways in the morning…

A great puzzle party, some wonderful hospitality from both Wil and the Coolen-clan made sure than Shane and I had a fantastically puzzling weekend – thanks guys!