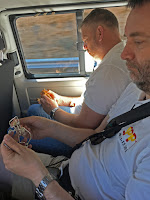 Bright and early on Saturday morning, somewhere around the crack of 9am we met up for breakfast in the bar downstairs (don’t judge us, that’s just where they served breakfast!). Somehow we all manage to order what we’d actually like for breakfast and there’s the usual level of banter before we check out and head for the mini bus…

Nigel had told us to please pack light on the grounds that there’d be 9 of us in a 9-seater mini bus, so there probably wouldn’t be much space for luggage… turns out there was more than enough space for 9 of us, our luggage and 15 giant inflatable bananas. 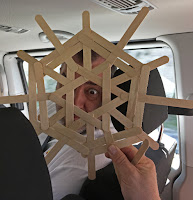 We hit the road for Cartagena, knowing there’s a four-odd hour journey ahead. Almost immediately the puzzles come out – I’ve brought a couple of disentanglements I need solved so I pass them around – they generally get solved quite quickly by various members of the touring party – I’m left none the wiser. About ten minutes into the trip I’m asking if we’re there yet. Totally unrelated, the music gets louder quite soon after I ask the question – Nigel’s apparently playing us soft American rock in order not to offend our sensitivities by playing his usual fare – we’re enjoying it – there’s even crooning from the ladies up front every now and then… and pretty soon we’re playing Beat-the-Intro and Big-Steve is creating customised trophies for the winners of each round: he’s writing his version of the song or the artist on a tongue depressor and handing them ceremonially to the winners. Time flies by and we cover four or five miles before we stop for a coffee by the side of the motorway. (I’m not good with numbers, it may have been further.) 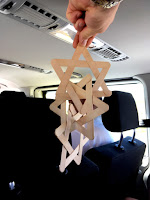 Steve finds a new supply of individually wrapped micro tongue depressors and we add a few to the collection, leaving the locals wondering why the heck we’re stealing their toothpicks. 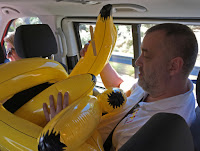 The next leg of the journey sees some rather impressive engineering: Ali and I work on a challenge to assemble a Hart-esque Polylink out of tongue depressor hexagrams while Steve and Frank work on an orderly tangle of giant inflatable banana triangles. Our initial experiments (OK, Ali’s initial experiments…) show that it probably won’t work, so we settle for a short chain of interlinked hexagrams before passing it across to Oli to improve – and seconds later he hands it back with a third one interlinked on the end…

Meanwhile Steve’s banana experiments have hit a bit of a snag – he’d been using tongue depressors to link the bananas together (use your imagination!) and they wouldn’t stay together when the construction neared complete-banana, so my old cap cover was set upon with a very small pair of scissors to produce banana-string – which turned out far more successful than the tongue depressors at keeping the yellow fruitiness together. Peak orderly banana entanglement is duly reached and celebratory photos taken before Steve suspends it from the roof of the mini bus.

The changing scenery announces our arrival in Cartagena and we head off in search of our first escape room of the day… where the girls leave us for a spot of shopping and a bite to eat. The first escape room requires a fair amount of Spanish and as we only have one Nigel, he finds himself getting harried for instant translations quite often during a reasonably fraught hour – we do not escape… Nigel’s first ever escape room is less than a stellar success – we have let him down… 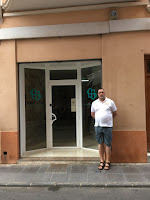 Reunited with the girls we head out in the general direction of the second escape room and having found it, settle down in a nearby pub for a snack and a drink while we organise the logistics for the second escape. The girls are going to join us for this one which receives rave reviews from all who’ve done it. We have two sessions booked and need to split ourselves into two teams. We decide that the two couples should be joined by a third puzzler and helpfully the girls have bought each of us a squishy banana (apparently a stress toy) and a disentanglement puzzle and we decide that the first one to solve their disentanglement will join us – a serious race duly ensues – with one person using all of his strength to “rearrange” the shape of one piece to prise them apart - Steve gets disqualified – and then Rob manages to solve his and he’s awarded a spot on the winning team. 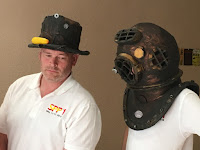 The five of us have a great time exploring Nemo’s submarine, solving the brilliantly themed puzzles and playing with all of the fantastical objects and machinery in there – before ultimately escaping with about ten minutes to spare… we head back to the pub where we’ve left the others while the room gets reset. Frank, Rob and I get to watch the second team while they solve the room – we find ourselves a little torn between wanting them to escape, but not really wanting them to beat our time… at the start of the game they resolutely avoid taking the hints being offered by our host and we remark on the fact that they really want to do this on their own (we may have told them we didn’t take any hints…) – after a while they sacrifice their principles and take the hints and make pretty good progress. Several times we put up a small cheer when they finally spot something we’ve been willing them to see, and solve something. In the end they escape with 5 minutes to spare, having taken the same number of clues as we did… so the girls’ team won! 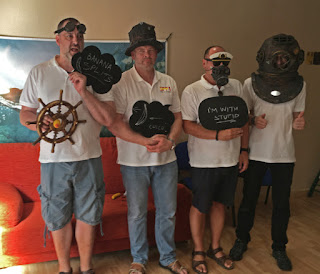 The second escape room was really excellent – the theming was superb and the puzzles all seemed logical – when you solved something, you knew where to use the answers, there was never a time when we found a four-digit number and didn’t know which particular random padlock to try and open with it (my pet peeve on lazy escape room designs!).

After the obligatory victory shots (with bananas!) we headed back out to meet up with the girls who’d been shopping again. Nigel dropped us off at our hotel for the evening in Santiago de la Ribera before meeting us for a short walk down to the waterfront restaurant where we feasted on some truly scrumptious local fare. 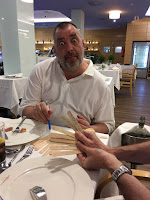 During the course of the evening Steve handed around some tongue depressors for us to autograph as a gift for Nigel, along with some check-sticks – the purpose of which was soon explained: we’d come up with a game for Nigel to play for the next year or two – when we were at his house on Sunday, we would each be hiding 9 numbered tongue depressors around his house for him to find, and the checklist sticks would allow him to track his progress and report back to us… he seemed really delighted.

After dinner we stumbled back to the hotel, managing to avoid getting lost and run over by the locals, and then crashed.

At breakfast the next morning we were surprised to find Steve and Ali had already had breakfast when we got down at more or less the appointed hour – apparently Steve’s phone had grudgingly agreed it was now in Spain and set itself to Spanish time, only Steve and Ali hadn’t realised this and duly ended up at breakfast an hour ahead of the rest of us.

We headed off to chez Croot for the morning’s puzzling and sure enough, as soon as Nigel left to return the rented mini bus, we scattered around his immaculate bachelor pad to hide our little wooden sticks – it would have looked pretty strange had Nigel decided to log in and check on his closed-circuit cameras at that point…

When he returned things settled down a little and Nigel offered the lads something to eat or drink, with Steve suggesting nonchalantly that he might want to be careful using the toaster…

Serious puzzling commences, I don the white cotton gloves and am presented with Richelieu on a towel… I take it apart with abandon, gladly strewing pieces around willy-nilly safe in the knowledge that I won’t be reassembling it – that will be left to someone else… only the disassembly is slightly more successful than I’d imagined it would be and I find myself with more than enough time to reassemble it – using the book – and several people helping me to spot the errant pieces now strewn all around the dining room table… but I’m pleased to say that Richelieu was reassembled with a little help from the gang, and Nigel advising on some mechanical fettling along the way – that is a very serious puzzle – assembling it without the instructions would probably take days! (A delight to be able to play with a legend of a puzzle – thanks Nigel for trusting me with it!) 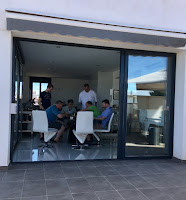 All too soon Rob, Gill and I are heading out to Alicante airport in Nigel’s car (Nigel's driving, we haven't stolen it!) – and no doubt the little ants are merrily hiding sticks again safe in the knowledge that it will take Nigel almost two hours to deposit us and return (thanks mate!).

We say our goodbyes and our thank-yous and breeze through security in spite of all those weirdly shaped puzzles in our bags. Airside the three of us grab a last tapas meal together before wandering around and raking through the shops while we wait for our slightly delayed Jet2 bus back to Brum – sparing a thought for Rob who has a further six-hour wait before his flight back to Schiphol - sorry Rob, we did it to you twice!

So, after years of threatening Nigel organises the first Spanish Puzzle Party – and it is EPIC… the organisation is brilliant, the stuff we got to do was fantastic and the company – well, it will be hard to beat! A fantastic long weekend jammed with laughs from start to finish, some puzzling and learning heaps about Berrocal… awesome weekend in every possible sense – Great job, Nigel! 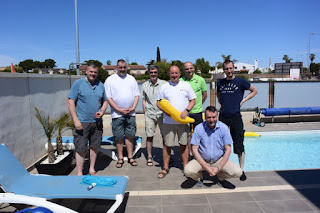