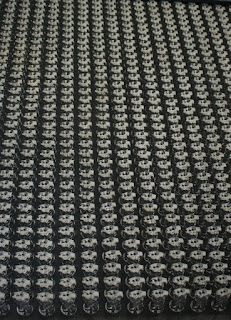 For the past couple of years Nigel has been threatening to arrange a Spanish Puzzle Party.

This year he made good on those threats and invited a few of us to his neck of the woods for some sunshine and some puzzling-related stuff. Having established that he was licensed to drive a 9-seater bus, he duly invited 8 of us over for a long weekend. We were briefed to fly into Malaga airport on the Thursday evening in order to give us a few days’ worth of puzzling before heading home on the Sunday afternoon / evening from Alicante or Murcia. 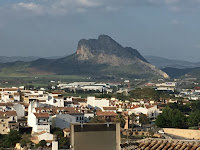 Nigel had a serious road-trip planned for us, and our most excellent of hosts was there to collect us at Malaga airport on the Thursday evening… or at least he was, along with everyone else when our delayed Ryanair flight arrived in the early hours of Friday morning – in spite of the fact that some of them had already spent about 5 hours in the airport, they all seemed glad to see Gill and I arrive from Brum. Nigel handed me the obligatory SPP polo shirt before a short hike to the bus. Nigel took us to our hotel for the next two evenings where we promptly checked in and crashed. 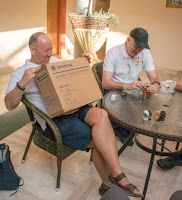 We gathered at the appointed, designated by the official spreadsheet, for breakfast before sitting in the hotel’s courtyard for a few gift exchanges… Steve presented Nigel with a giant tongue depressor box (Lord knows how he got that inside his Ryanair carry-on!) containing a pair of giant inflatable bananas – that tone for the weekend was duly set. (Nigel also received some puzzles, a bottle of something and some shortbread in a tin commemorating the royal wedding… the previous one – because he’s not that much of a royalist!).

After a bit of puzzling we headed out in our trusty bus to the Berrocal Foundation’s workshop in Villanueva de Algaidas. On the way there Big-Steve produced a few more inflatable bananas and the back row of the bus almost passed out with the exertion of inflating 15 rather large bananas – sadly one did not make it and it was ceremonially turned into a cap-cover for moi – quite a fashion statement judging from the looks of some passing motorists.

At the workshop we’re met by Beltran and Carlos, Miguel Berrocal’s sons – Nigel is greeted like an old friend. Beltran and Carlos kick off the tour of the workshop with a couple of huge posters in the waiting area: one shows hundreds of Mini Davids (jaw-drops) and the other a personalised bonnet ornament in Berrocal’s Mercedes -a Mini David that would rotate 360 degrees every time the car was started.

In the workshop space proper Beltran begins by describing the beginnings of his dad’s artistic development, talking passionately about the process, his inspiration and his use of both space and form – how he found various materials and elements to include in his work and why he started out making his sculptures in pieces that could be assembled (literally so that he could pop them in the boot of the car and cart them around… humble beginnings for the eventual pinnacle of his puzzle creations at least!).

We walk around the workshop following a natural progression with Beltran guiding the discussion and showing us pictures and illustrations on his tablet when the works he wants to talk about aren’t actually in front of us (like Citius Altius Fortius which is at the Olympic Museum in Lausanne… although there are a couple of copies of that in the workshop too!) and Carlos chipping in with occasional anecdotes and further explanations. 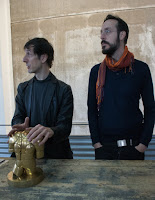 Now I’m not ashamed to admit I’m a bit of a Philistine, but the guys work their magic on me and the tour turns into quite a moving experience for me. 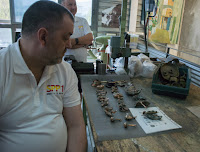 Halfway through the tour we get to play with a copy of Torero casually left out on a workbench… next to a set of pieces that will make up Omaggio Ad Arcimboldo when they’ve been properly cleaned up and reassembled… a nearby trolley has a complete set of Richelieu bits, all beautifully polished before heading back to a lucky collector. 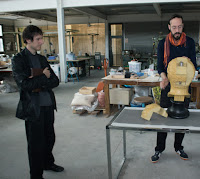 It doesn’t take a bunch of puzzlers too long to take it apart, mixing up the pieces along the way just for a laugh and then reassembling it – under the watchful eye of Beltran who offers the occasional bit of advice and points out some of the subtleties of the design and the manufacturing process… off to one side there’s a grubby-looking plastic container with a set of bits in it – a set of unfinished pieces of Torero straight out of the moulds, ready to be finished off and packaged up, one day. (The guys explained that most of the casting of the multiples was completed in one go years and years ago and then the pieces were finished off when they were needed. For some that was the entire edition of 300, 1000 or 10 000. For others, only a subset was cast and further copies can still be cast today within the original edition.)

When we’re finished with that we head upstairs to the mock-up (the studio and workshop have been moved from their original home in fair Verona, back to Spain) of the design studio, wandering past a bunch of Berrocal’s tooling and machinery – one of which has a signed sticker on it – I find myself wondering what that sticker would be worth, let alone the machines and the sculptures in this workshop…!

The studio is laid out with a single table in the centre running the entire length of the long room – this would allow the artist to have several projects on the go at any one time and enable him to scoot from one project to another as the urge took him… literally. One side of the room is taken up entirely with a massively long bookshelf containing all manner of inspiration and exposition… and one shelf is given up to a set of glass cabinets containing an example of each of Berrocal’s multiples – his puzzle sculptures.

Beltran and Carlos pick out a few of them and talk about them, their development, the puzzling elements, their various phallic references (it had to get at least a nod!). We start with Romeo e Giulietta, one of the earlier multiples, completed in 1967. We wend our way through the classic Mini’s and spend a while on Paloma Jet with its fantastical folly before diving back into the real puzzles.

From there we head down into the basement and we all agree that it feels a lot like a scene in Raiders of the Lost Ark where Indy heads into the mysterious warehouse that contains all the treasures.

Carlos shows us around, showing us the moulds for one of Berrocal’s grand pieces of public sculpture, and below them several sets of moulds for the Mini’s, Il Cofanetto and several other recognisable multiples – we’re all dragging our jaws along the ground by now… but when Carlos takes us over to bins piled high with raw, cast pieces of Il Cofanetto awaiting finishing, treatment and plating, we’re all seriously slain. 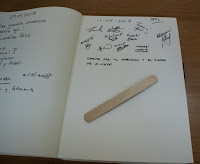 Back upstairs Gill and I have a short conversation about the fact that we like to collect art on our holidays rather than the usual tourist tat and we then decide that we really should support the lads and buy a (very!) little bit of their dad’s work. We pose for pictures beside some of the Almogavares – big brutish torsos with actual anvils at their hearts – now there’s an image to conjure with - before signing the guest book. 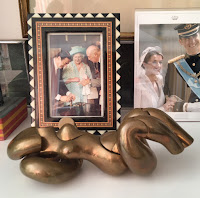 From there we follow Carlos to the family home in the village for lunch with the lads and their mom – served with a complete set of Il Cofanetto cutlery, of course. We have a truly wonderful lunch while listening to stories of their time in Italy, of visits from artists and stories behind various photographs and pieces of art in the rooms – which would put several serious art galleries to absolute shame. The family are warm and engaging and treat us like friends in spite of being just a bunch of weird Midlands Puzzlers! 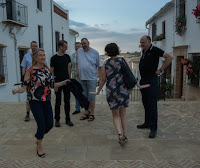 That evening we head into Antequera for a bit of a wander – things go badly wrong when Nigel decides he’s had enough of leading the walking tour and insists that someone else take the lead… so Frank and I head up the nearest hill – which turns out to have a lovely view of the town below, a rather grand old church and a pub on top of it – so we settle down and have a few rounds of drinks while chatting about the Berrocal visit… when hunger drives us onward we begin to head downhill, but not before there’s a bit of a La-La Land tribute (or perhaps a Sound of Music retrospective – it was hard to tell to be honest!) and some shenanigans on the way down - all of which make for some great photographs. 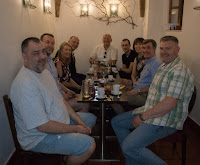 Back down in town we line up a suitable-looking tapas joint and take up a small alcove for the evening… we feast on stuff that Nigel orders for us (he’s slipped back into tour guide mode) and have a really superb meal – before collapsing back into our beds at the hotel on the outskirts of town.

SPP Day one was a pretty darn memorable day!
Posted by allard at 22:32