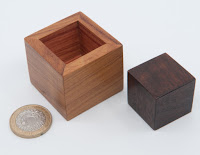 Simon Nightingale likes to push boundaries… in all sorts of senses!


His One Piece Packing Puzzle certainly pushes a category of puzzles as far as it can possibly be pushed… surely!


Every now and then I engage in idle banter with puzzlists somewhere about what makes a good puzzle – invariably the second favourite response (after “A great A-Ha! moment”) is a low piece count… arguably this puzzle takes that to the absolute extreme: can you possibly make a packing puzzle with fewer pieces? It has a box/frame and a cube to be inserted… it’s hard to imagine dispensing with either of those two elements without ending up without an actual packing puzzle. [OK internet: there’s a challenge for you!]


Expertly crafted by Eric Fuller back in 2008, this little puzzle measures about an inch cubed. It consists of a simple-looking five-sided cubic box and a slightly smaller wooden cube designed to nestle neatly inside said box… sounds simple? 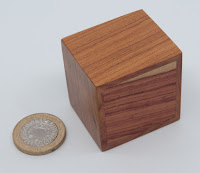 Trying said nestling action and you’re invariably going to be faced with a wooden cube that simply bounces out of the box… tap it down and it will bob up again – being supported as if on a little cloud of magic – or there are a pair of repelling magnets in there fighting for their own space – you choose whichever interpretation makes you happiest.


OK, take a step back and think(c) a little… the box seems pretty honest so there probably isn’t much going on in there… and the cube doesn’t appear to have any moving bits in it – certainly none that move around if you give it a good old shake… although there must be some magnets in there somewhere (unless of course my magic cloud theory still works for you).


Thankfully there’s a reasonably limited number of ways you can put said cube into said box, and if you had some way of demarcating which ones you’d tried, you could probably bash through them quite quickly… but where’s the fun in brute-forcing a solution on a lovely little puzzle like this?! 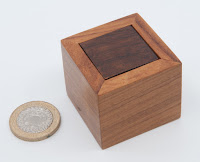 Step back further and think(c) a little more and you’ll work out a sensible strategy for divining exactly what to do… that’s a far more rewarding approach!


Rather chuffed to have finally stumbled across one of these little guys for sale – I think it’s a masterclass in paring back everything right back to the barest of bones without reducing the puzzle element to mere triviality.
[Sorry if this blog post feels a bit more whimsical than usual(?!) - I blame the weather: it’s been unseasonably warm in Blighty and it’s probably going to my head.]
Posted by allard at 19:48