Saturday morning is the exchange so we’re up early and hit breakfast along with a large throng of eager puzzlers. Just before 9am we all troop into the hall and set up our piles of puzzles on our individual tables, remembering to place a copy on the Lilly Library donation table.

The exchange runs for about three hours with just over 70 participants exchanging puzzles with one another through a number of language barriers, yet we all understand the challenges we’re being set and the constraints we need to obey - puzzling is perhaps a pretty universal language.

Big-Steve has been teasing us about his costume for the exchange and telling us that his exchange is called Sumo Cover-up - so we’re all expecting the traditional loin cloth and we’re a bit disappointed when he and his assistant Asher are in shorts and a Kanazawa polo shirt - especially after the photo earlier that morning of Steve in the lobby in a pair of Big Banana boxer shorts that “the internet” has provided via Pat Major - with a hamster sticking out of the trouser leg - it’s not the sort of thing you’d want to see before breakfast - sorry Jo! 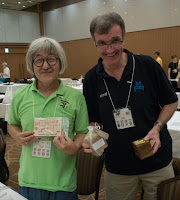 Big-Steve’s schpiel is adjusted for each participant and I suspect I got the full beans - with plenty punny plays on words. We have a lot of fun on our exchanges - Mine’s a design from Volker Latussek, designer of last year’s stand-out winner, Casino that used round casino chips in a packing puzzle. This year’s design uses a totally different concept, square pieces! Put 6 copies of each of two shapes into a box so that the lid (Guillotine) slides open and closed freely... there are two solutions. I tell everyone it’s simple and shouldn’t trouble them, but I know that it’s a bit of a pig and everyone who’s tried it so far has only found one of the two solutions after a long time fiddling with it...it’s a sod!


Gill assists me on the exchange and does a great job of schlepping the puzzles and wrangling the camera for the obligatory pics with each of the exchangers. As I’m doing the rounds I can’t fail to get the strong feeling that this year’s crop of exchange puzzles is even better than usual - there are several puzzles that I literally can’t wait to work on... and later on that afternoon I allow myself a little time to solve the puzzle locks in the exchange - I am not disappointed!

Late on in the exchange I’m walking past Big-Steve and says that people are concerned about how I’m treating my hamster – I think nothing of it and continue on my merry way – until a few minutes later back at my table I spy a Mr Puzzle laser gun with Erical inside it!


By about the time that they’re calling for the lunch boxes we’re down to our last two or three exchanges so we settle down for our packed lunches, knocking off the final few straight after lunch - so by early afternoon I’m back up in the room taking the obligatory pic of the exchange puzzle haul spread out across the bed... before packing them all back into one half of one of our cases - looks like the extra suitcase we brought over should do us... unless there’s a lot of stuff I need to buy at the puzzle party of course! 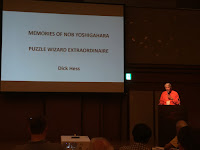 I always make a point of trying to attend the lectures at IPP and get to listen to recollections of Nob Yoshigahara from Dick Hess, Nob’s son and his younger brother - all unique, entertaining and giving a lovely insight on this wonderfully intriguing puzzle man. After the lectures, a number of rather special duplicate items from Nob’s collection are auctioned in the lecture room. I put a low-ball bid on one item and I’m glad to see that someone else has chosen to pay almost ten times that for it... several other items went for seriously high numbers - and I’m sure they will make some collectors rather happy - not just because of the puzzle itself, but also because of their rather rarefied provenance. 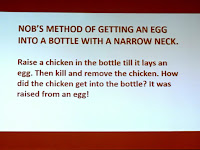 I unwind for a bit between the lectures and dinner and we head down to dinner and find a table with Nick, the Pletchers, the Nicholls and Chinny. Gill and I manage to misjudge the dinner queues and find the buffet largely cleared on two occasions for the main course and for dessert - we settle on rice and bread, and after the dinner head out to the 7-11 for snacks and ice creams with a gang of others who also have the munchies.


After the dinner winds down we find ourselves outside in the lobby with a bunch of people discussing hamster antics at which point Big-Steve moans about the fact that he doesn’t have a hamster pin... the Grand High Hamster disappears up to his room and a few minutes later Brian, Frank and I are doing the formal investing and slapping Big-Steve about the face with our hamsters before presenting him with his pin. A while later Asher seems genuinely touched to be similarly invested for his services to hamsters too after schlepping Steve’s hamster around all day and ensuring that the SPH photo-bombed every single photo of the exchangers swapping puzzles with Big-Steve.


A little while later we’re all in hysterics when he’s trying to explain the investiture, the secret handshake and the other paraphernalia to Kendra - she is clearly impressed and makes suitably impressed noises. We all agree that she’s definitely a keeper!

The evening’s magician wanders across at some point and we spot Iwahiro explaining the SPH in Japanese - Big-Steve and I both spot the opportunity instantly and call them over and ask if he could put a hamster inside a balloon for us (earlier in his show he’d put a lemon inside a balloon). He’s hesitant at first saying it wasn’t possible, but the more he played with the hamster the more he warmed to the idea and a short while later, after two less successful attempts, we had a hamster in stereo into a fully inflated balloon - and his street-cred literally soared among our little late night group of revellers.... I crashed pretty soon after that!


I set the alarm to get myself up early and left Gill sleeping in the room when I headed down for breakfast. I found Andreas at a table on his own so joined him for breakfast... with an inevitable discussion about IPP souvenir books and their accompanying digital media, with an interesting detour about Klaus’ German dialect - he was at the table next to us – we weren’t being randomly rude about people. 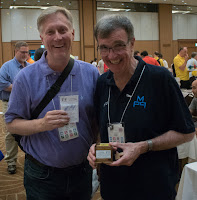 The puzzlers all duly left breakfast and gathered outside the banquet room where the puzzle party itself was being set up. We all wait patiently outside until the appointed hour and then the polite stampede into the hall ensues. I wander up and down the aisles trying unsuccessfully to find Mine’s table before picking up a new Endo-san puzzle from Susuma at Torito’s table. I collect a handful of Kotani-san packing cubes - several of which I’m pretty sure I don’t have; the others will make excellent gifts for puzzlers back home.


At some point a literal scrum develops around a table that had been empty and we realize that Mine is setting up his stall - I join the queue, but by the time I get to the front, the main puzzle I wanted is already sold out -  hopefully my friend has a spare copy for me.


A bit later I find a copy of James’ IPP12 exchange puzzle for sale for the princely sum of JPY500 on one of the tables selling Nob Collection spares and I can’t resist picking it up. 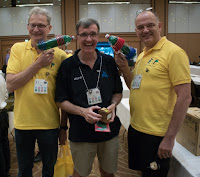 Wil has a number of new puzzles from Jean-Claude on sale and I pick up a couple of interesting items, including a large wooden puzzle padlock with some seriously heavy-duty magnets in it and some lovely colourful detailing using the anodized aluminium bits he’s been using recently.


I pick up an absolutely beautiful tiny puzzle box with the tiniest yosegiYosemite pattern I’ve ever seen - the box’s longest side is less than a centimetre across on this thing and I’m delighted that someone took the trouble to point it out to me.


I hoover up one-of-each from Hajime Katsumoto’s table. He has a wonderful array of really intriguing looking restricted packing puzzles that I can’t wait to have a bash at failing at!


I sign up for the next IPP, paying a deposit and receiving not only a puzzle but a badge as well! I’m committed to going now! It feels good.

After lunch a few of us head out for another round of happy pancakes, and they do indeed make us all rather happy - I get another chocolate and ice cream number and Gill has a savoury pancake managing to squeak in just before their 14:30 cut-off. The conversation flits between cooking techniques for French fries and cryptography... I try to keep up.


Back at the hotel we hit the lectures that are just starting. Andrew gives us an update on the goings on at the Lilly Library before a series of Japanese puzzle designers introduce us all to their work and their process and inspirations - all fascinating.


I head up to the room and spend an hour or two typing up my notes from the last day or two before having a quick shower and heading down to the awards dinner with Gill - several of us are proudly wearing our wooden ties from Kathleen and everyone seems to enjoy the tug and spring back into shape action they deliver.

We commandeer a table near the buffet with Frank, Brian and Sue, Steve, Jurg, Gary and Asher and Kendra. Hamster-based merriment ensues. Our table has much to celebrate as first Steve goes up to collect Ali’s Jury first Prize Award for his Hokey Cokey Lock and then Brian goes up to collect Juno’s Jury First Prize Award for Slammed Car. The Puzzler’s Choice and Jury Grand Prize goes to 4L Basket - a tremendously interesting packing puzzle I had a lot of fun solving a few days earlier. Worthy winner...

After the awards there is a lot of milling around, a little saying goodbye to friends and many promises of seeing one another in a year’s time at IPP40. There is also further hamster-order-investiture business to be done and three more fellows are given their wings - after much inducting with plush hamsters. (It’s a thing, look it up.)


At one point Steve unbuttons his shirt to reveal a large hyper realistic chimp’s face on his slightly tight t-shirt - he proceeds to do his best chimp impersonation while manipulating the chimp’s face and whooping - once we recover some semblance of order we convince him to repeat the performance and immediately upload the footage to Facebook for archival preservation... my work here is done!


Just after 10pm we’re shepherded out of the hall so we say our goodbyes to the folks we won’t be seeing on the post trip and head upstairs to begin packing our suitcases... trying to distribute the weight and bulk more or less equally across three suitcases, while keeping everything we’d need for the next couple of days in a small carry-on case... somewhere around midnight we crash, semi-organized.
Posted by allard at 07:38