Double Squared, a.k.a. Black or White

When I received my first order from Sloyd, there was a little note in the box saying “Free gifts from our own series. Very different types of puzzles. Hope you’ll enjoy them!” along with a couple of additional puzzles – one of which was Vesa Timonen and Tomas Lindén’s Double Squared.
I’d spotted it as one of the entries to the 2010 IPP Puzzle Design Competition and wasn’t sure if it would be my cup of tea or not, but since I’d just been given one, it would be rude not to play around with it at least a little, right? 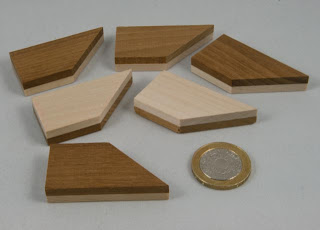 So the goal sounds reasonably simple: make square of white or black (OK brown!) – your choice. There’s another version that says “Arrange the six pieces (without any support) to make a white (or black) square.”  There may be a subtle difference in there, and it might be useful, or it may be a total red herring, you’ll need to work that out yourself.
It consists of six pieces of doubled up birch – light on one side and dark on the other – putting them together in the obvious manner produces an odd coloured piece left behind, or alternatively, the right coloured piece that’s the wrong shape.  OK, so it is a puzzle after all ... so you start experimenting with other concoctions for making squares – but every time you end up with an odd shaped or coloured piece left behind ... 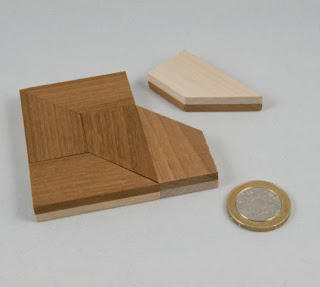 Hmmm ...
It turns out that the pieces are helpfully provided with what I’d call (probably incorrectly – see the ensuing comments section below in due course!) a parity problem – there’s always one wrong shaped or coloured piece, and the only way to get around that is to get rather creative!
The eventual solution is a real killer – you’re not going to stumble across this one by accident. It’s definitely worthy of an entry into the Puzzle Design Competition.
Thanks Sloyd for the freebie!
[I need to add a little note about Sloyd’s own range of wooden puzzles – they’re not expensive and rather nicely made – all in light woods – birch and the like, and they come very cleverly packaged – the card backing and hanger includes a separately stapled solution sheet – so it’s there if you want it, but you have to make a conscious effort to open it – very clever! – and yes I did...]
Posted by allard at 18:15