Six-piece burrs … Dipping my toes in a new pool.

I’ve always been scared of burrs. There. I’ve said it. In public. In front of a bunch of people who can now consider me a second class puzzler… (Which in fairness is probably about right! But in my defence, I am enthusiastic!)

So for most of the past 4 or 5 years (i.e. most of my puzzling life) I’ve avoided burrs – sure I’d played with the odd burr when I stumbled across it from time to time (although I never inhaled, m’lord) but I’d never really tried to understand them and get to grips with them. I’d certainly come across some pretty incredible, analytical web-sites dedicated to all things burr, but my prejudices won out…until about a year ago, when I decided that I needed to face my fears and “get into” burrs, so I did what every self respecting puzzler does, and bought handfuls of them…most of them from Mr Puzzle, and a really useful burr set from Philos. 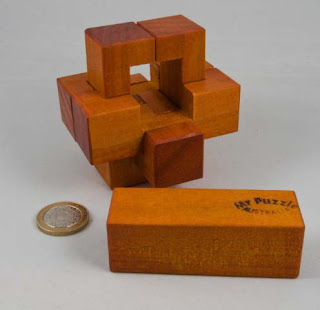 This is a really simple, plain vanilla 6-piece burr. It’s sort of the dummies guide to burrs. That’s why I started there. Baby-steps, baby-steps. It arrives disassembled, look at the pieces and you can see how the different pieces can slot together. Notice the key piece (that solid plank without any notches) – that one’s going in last, so you need an assembly that looks almost like a completed burr, with a single hole right through the middle that you can slot the key piece into.
Like I said, this one’s a simple design, so it lets you just assemble the first five pieces without much bother and slide in the last piece. That’s not so bad…maybe I’ll give these burr things a bash after all. 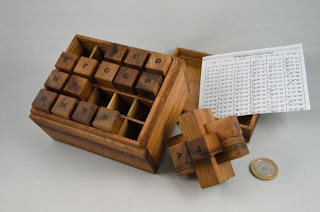 Next up is a set of 20 individual burr pieces – most of them different, with a couple of duplicates … but this set will enable you to build 151 different burrs (ignoring rotations). It comes with a list of pieces that will each build into a six piece burr, starting with reasonably straight forward assemblies and ending with some slightly less trivial examples. To me this is the equivalent of a burr skills-building exercise – start at the beginning of the list, select the 6 pieces and build a burr. Cross it off the list, repeat, until end, go! This little set is tremendous value at about EUR 20 (I got mine from “Toys for all” in Germany – it literally gave me hours of fun playing with different burrs and learning to ‘see’ different assemblies. The first few use a key piece and are quite straight forward, then you start using just notched pieces and by the end you’re having to introduce pieces sequentially and manipulate the whole assembly in order to get things into their final shape. Spending a few hours with this set helped me get past my mental block about burrs.

Taking it to extremes 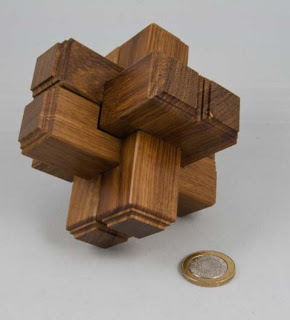 I got a Mega Six from Mr Puzzle because it claimed to be the daddy as far as six-piece burrs go. [Okay, technically it claims: “The puzzle is incredibly more complicated than the commonly known six piece puzzle”]  This was derived from one of the designs that Bill Cutler’s seminal research on burrs uncovered as having the deepest level for a six piece burr (i.e. most moves to remove the first piece). It takes a monumental 10 moves (including some multiple piece moves) to remove the first piece from the assembled burr. Theoretically there are twenty assemblies for this set of pieces, practically speaking only one is feasible – I’m guessing because most puzzlers only have two hands and have to obey the law of gravity, most of the time! 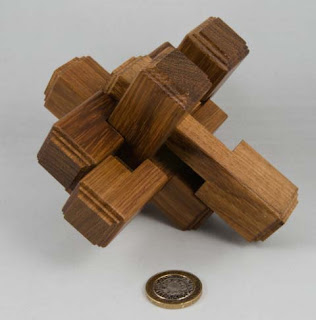 Solving it, i.e. reassembling it without the assistance of a solution sheet, is quite simply beyond me – the movements are that complex that even if you can work out which pieces lie where in the solved state, working back and establishing what would have to move where to allow the assembly, is simply beyond me (see, second class puzzler!). Having said that, using a set of Brian’s really clear instructions make it possible, but it remains an exercise in dexterity and concentration – mine had a set of masking tape numbers on each piece to make following the instructions easier for ages, and it was still fiddly and confusing.

It’s a tough burr – tougher than me! But I’m a puzzler, so I have to have one – and who knows, maybe one day I’ll be good enough to be able to work it out for myself!

I’m still a bit of a klutz when it comes to solving burrs – I spent about three-quarters of an hour at Chris’ place on Saturday playing with one of Wil Strijbos’ aluminium burrs – most of that trying to figure out how to put one piece back in after I’d inadvertently turned the rest of the puzzle upside down, and I only noticed that when Chris pointed it out to me. I still have a lot to learn! But I’m trying…

Further resources
I’ve found these resources incredibly useful:
Rob Stegmann’s page on Interlocking puzzles – with heaps of burr-stuff
IBM Research Burr page
Burr Tools - this free software is incredible! It lets you define all sorts of problems and then works out how to solve them.
Posted by allard at 18:27