If memory serves, this was the second item I ordered from Cubic Dissections – it looked lovely in the pictures on the site and they had some in stock. Any questions? 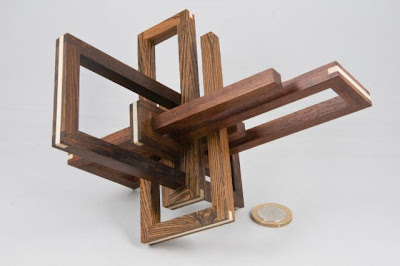 The box duly arrived from the US and on opening the package my heart absolutely sank when I noticed a couple of bits of loose wood – thinking the worst: the damn postal service has broken my new puzzle, I investigate further – but everything looks fine … then I realised that Eric has stacked the three pieces and placed two sticks between the outsides of the three paperclips, simultaneously joining them together so that they won’t move around in transit and turning the three potentially fragile pieces into a single, solid unit…bright boy that Fuller! The packaging had done its job perfectly and the puzzle was in pristine shape. And the pieces aren’t fragile as you might expect from a structure with relatively small joints and long arms. 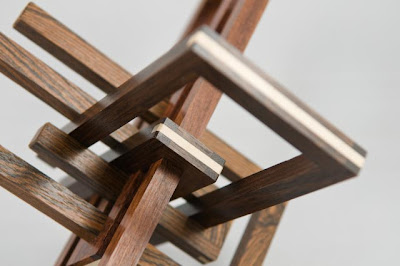 First impressions really count and this puzzle looks gorgeous. The attention to detail on the paperclips is incredible – the splines across each joint in a contrasting wood not only look smashing, but really strengthen the weakest part of each piece. Each paperclip is slightly different in terms of size and orientation and they’re made in three woods. The fit between the clips is spot-on and a little experimentation quickly establishes what the end-state will need to be in order to get all three paperclips properly interlocked at their centre.
I suppose the right thing to do is to think of them as forming a really large, loose three piece burr – but I’m rubbish at burrs, so I just fiddled with them – sometimes I’d get reasonably close to the end-state only to realise that I’d totally locked myself out of getting the last piece into the right place… after a couple of weeks of on-and-off experimentation, I finally relented and asked Eric for a copy of the solution (in fairness, Eric’s description says: “At 14 moves, finding the solution to this work of art is no trivial task either. It is a very confusing and difficult puzzle to solve.”) … thus confirming earlier references to second class puzzler! 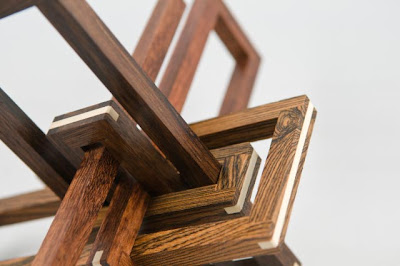 This example was made by Eric Fuller in 2010 and uses Bocote, Jacaranda Pardo and Grenadilla wood with Holly splines, and yes, it’s an Oskar van Deventer design – his name seems to pop up quite a bit in my little collection – not sure if that says anything about my tastes in puzzles or his prodigious ability to design interesting puzzles … yeah, it’s probably all of the above!
Posted by allard at 20:38