Toward the end of our last Midlands Puzzle Party, Ali announced that he’d made us all a puzzle as a gift and started hauling out wooden boards with pegs and holes in them, along with a fist-full of bits of rope with odd markings on them.
He dished out a length of rope and a board to everyone and then explained that the aim was to thread the rope through each of the holes, touching all of the pegs, without allowing the rope to cross over itself and keeping all of the red markings on the rope hidden from view (i.e. behind the board). 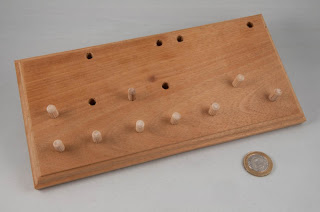 One end of the rope helpfully (?!) has a knot in it giving you a handy starting point and a bunch of us started playing with them right away, merrily creating strange, messy squiggles around an apparently random set of holes and pegs – once or twice someone got close to hiding all of the red marks and asked for a ruling from the designer who just grinned and pointed out which of the rules they’d broken.
A bit of fiddling showed that Ali’d done a rather neat job of picking just the right places to put that blasted red marking to make most of the combinations of threading and looping not work. And if you came close, invariably you found yourself needing to cross over your own path. Stop. Rewind. Try again.
By the time MPP3 had well and truly wound down, nobody had solved it and everyone took their newest challenge home to work on...
I picked it up every now and then over the next week and each time found myself coming up just short – usually because I found I needed an extra hole, but I was pretty sure that Ali wouldn’t have forgotten to drill one of the holes, and anyway, I’d heard via the inter-web that some folks had solved the puzzle already, so it must be possible – time to engage (what’s left of) the brain ... spend a little time eliminating the potential routes and then have a little brainwave (of sorts!) – he didn’t say you couldn’t  go around the edges when he explained the rules – that’ll give me my extra hole – that’s it! Wing Ali a short email to confirm that my new discovery is on the money, only to have him dash my hopes on the rocks by confirming that you aren’t allowed to sneak around the edges – only use the holes. Dagnabbit! Thought I had him there...
He did add a little bit of extra information and said that the last bit of rope past the second last red marker isn’t used – which is rather useful as it solves my problem of having one too few holes – he also added rather teasingly that I’d know when I’d solved it ... and I heard of a couple of folks telling of their “A-Ha!” moments – me, I had no clue! 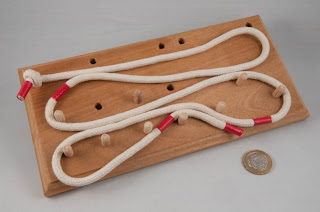 With the extra bit of information, I threw myself back into solving it – and got absolutely nowhere!
A couple more sessions saw me emailing my frustrations at the designer, if only so that he’d know I was enjoying myself – not that he’d be taking any pleasure whatsoever from my suffering, surely...
At one point in the ensuing exchange of emails, Ali suggested a change of perspective might help ... and that was the nudge I needed – I was absolutely dumbfounded at how well he’d hidden that in the subtlety of the design on the one hand and his handling and helpful demonstrations on the other – sneaky sod!
The “A-HA!” moment is really brilliant – you immediately know that you’ve solved it and it rewards you instantaneously. Damn fine first puzzle from Ali Morris – thanks mate! That was a lot of fun!
There’s a bit more for the curious after the break, but it does contain a picture of the solution ... given the nature of the puzzle, you’re not likely to stumble across one anywhere else, but the “A-HA!” and the resultant in-joke is simply too good not to share...
[Having said that, I’ve deliberately taken the pictures on this page to give you enough information if you want to try and make one of your own – the relative distances are more important than the absolute distances and you should be able to derive the measurements from the photos.]

In his email, Ali suggested a different orientation might help. Up until then, every single time I’d worked on the puzzle I’d had the holes along the top – not just because that’s how he gave us the boards, or because that’s how he demonstrated the puzzles to us, but because it didn’t occur to me to do it any other way.
Turning the board around makes it hard not to notice a distinctive up-down pattern in the top left corner ... and the solution is the very name of our little puzzle party – Gotcha! Fantastic! 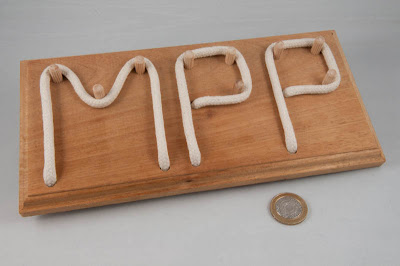