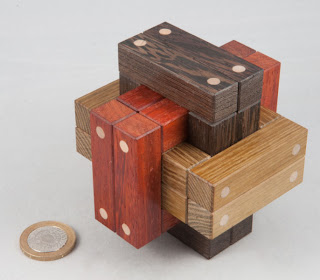 This puzzle is a bit of an enigma, and indeed, I’m going to be forced to split this blog post in two to avoid telling anyone anything they might not want to hear – because it’s impossible to really talk about the puzzle without including any spoilers.


I first stumbled across the Ambigram Burr on the Renegades forum, and it sounded intriguing – being described as tricky in spite of it’s relatively low burr move count – and everyone who’d seen one and had a play with it seemed to rave about it (that in itself cause for serious consideration!).
So when I was over in Eindhoven at the Dutch Cube Day, and Bernhard Schweitzer had a couple available for sale, I had a closer look. Expertly manufactured by the New Pelikan Workshop, it looks like a rather well-made 6-piece board burr with the shoulders of each joint reinforced with dowels. The boards are made in three distinctive colours (wenge, padauk and robinia) and make for a very handsome puzzle.
Bernhard was on top form, entertaining us with a story of a particular puzzler who managed to rip his copy apart because he was so convinced that it had to move in a particular way that he just kept piling on more and more pressure until the inevitable happened. Interestingly Bernhard was demonstrating the solution and that seemed  to help the sales process, which is probably unusual for a puzzle.
Gregory’s design is really unusual and the Pelikan guys’ work does a fantastic job of disguising certain aspects of the puzzle – making this a really excellent puzzler’s puzzle…
Now if you want to read some more, follow the link, but be warned: there be massive spoilers ahead – so don’t go there if you’re going to get one for yourself and want to enjoy the ‘discovery’…


OK – so first things first – the Ambigram Burr looks absolutely like it should be a standard 6-piece board burr – but it’s anything but! The unfortunate puzzler in Bernhard’s story was convinced it was and treated the pieces as though they were, and effectively tore some of them apart… 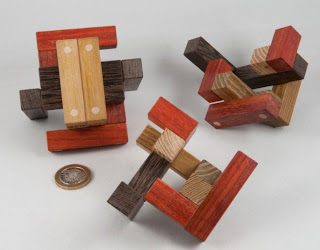 The picture on the side shows the puzzle half apart – first thing to notice is that the three colours on the pairs of boards are there to lead you astray – there are only four pieces to this puzzle, made up of a combination of bits of boards – meaning that some of the dowels you think you can see reinforcing the shoulder joints are in fact decoys. Rather well-hidden decoys.
Knowing where to start, the first move literally separates two mirrored halves and then a series of rotations, twists and tugs separate those halves into their respective pieces.
It is a great puzzler’s puzzle… tremendous design Gregory!
Posted by allard at 07:41