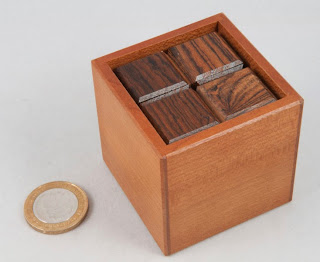 One of the things I really appreciate about a lot of Stuart Coffin’s designs is that they start from an interesting point of departure, then develop a few themes before settling on a particular puzzle design – if you read his book Geometric Puzzle Design you’ll find a lot of examples where he’ll start with a particular set of pieces, restrict them somehow and then use the resulting items to develop a puzzle.
I think Pieces of Eight is one of Stewart Coffin’s classic puzzle designs and it starts from a beautifully simple premise that Coffin develops in chapter 22 "Theme and Variations", and then turns into a wonderful little puzzle.
Pieces of Eight starts with a simple dissection of a cube into two identical C-shaped pieces. Two of those C-shaped pieces can then be joined together in eight possible configurations that will allow the cubes to be completed by joining on another C-shape – omitting rotations or reflections. That’s interesting - but then Coffin notes that those eight pieces can then be assembled into a 2*2*2 cube – that’s a puzzle! In fact he poses a number of assembly challenges for the reader using those pieces including a 2*2*1, 2*3*1 and some step formations. 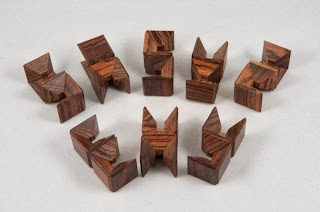 My copy came from a recent auction that saw Eric Fuller reducing his stash of his own puzzles a bit – so I was able to purchase an unusual copy of this puzzle with the pieces made in Bocote. The assembled pieces fit neatly inside a cherry box signed and dated on the base by Eric. Tipping the pieces out leaves a 2*2*2 cube on the desk – the fit on the pieces is rather good so the cube holds together very nicely – and the finish is so darn good that when it’s assembled, it’s pretty darn hard to find any visual clues as to where the pieces separate – so the only way to attack it is to feel your way around the edges, tugging gently in different directions until you find a bit that can be released. Disassembly is reasonably trivial once you identify your first bit to tug free, and the resulting bits are interesting to look at as they’re all different (you were paying attention at the beginning of this post, weren’t you!). 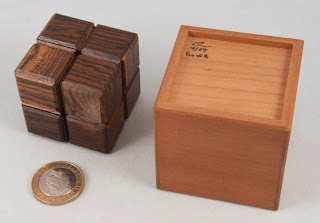 Assembly on the other hand is anything but trivial! I can vouch for the fact hat there are stacks of ways of snookering yourself right at the death – everything goes together brilliantly only to leave you with a piece that will only fit at right angles to the rest of the cube, or worse still, leaves you with a set of misaligned holes.
Pieces of Eight has been around for ages – and I think it’s rightly earned its place as one of the classics – and I rather like my copy from Eric’s collection…