I only had one Eric Fuller box in my little collection, and it was a sod! (To be honest, that was literally why I bought it!) – then I went down to visit James Dalgety’s Puzzle museum and got introduced to quite a few more of them – and they all kicked my butt too! So when Eric announced he had a new box for sale I dived right in … in fact it got me out of bed early to make sure that I didn’t lose out on getting one! 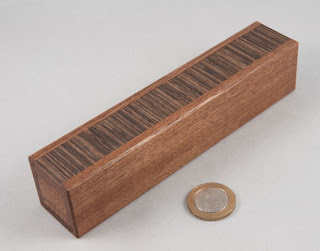 Havana’s Box #1 is going to be the first in a series of cigar-sized boxes created in honour of Eric’s local cigar bar – it turns out that he’s a bit of a cigar aficionado and happily admits that that’s his favourite way to unwind after a heavy day in the workshop. Each of the boxes will be named after someone from the cigar bar and the first in the series is therefore “The Chris”, named after the club’s doorman.
Eric promised that the series would get increasingly difficult and described the first one as “fairly easy” – but given some of the things he’s come up with, who knows what that really means!
The box is pretty much exactly the size you’d expect a single-cigar box to be … although I should point out that that’s coming from someone who knows absolutely nothing about cigars at all! The box is made of a fine-grained dark hardwood called Sapele and has some Wenge veneer on the two main faces of the box to make it look pretty. (It succeeds!)
Examining the box you’ll quickly spot a bit of movement in the two main panels, but other than hinting at the fact that you might want to find a way to get them to slide, they don’t do an awful lot. There are no obvious sliders or keys, so this definitely isn’t anything like a standard Japanese style puzzle box, but then we know that Eric is far more inventive than that!
Playing around with it for a while I found something unexpected happened. [It probably says a lot about my puzzle-solving skills that most of my solves rely on stumbling across things I wasn’t expecting! Very few have resulted from deduction, logic or any form of scientific approach…] Fiddling around with the unexpected thing, led to half-opening the box, showing the prize – a Free Havana cigar – waiting to be liberated … and cunningly, the box is just the right size so that only having it half-open means that you cannot extract the contents without ruining them… a nice touch. 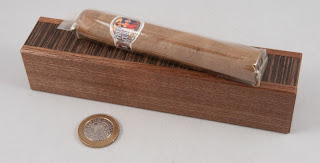 Fiddling around a little more and the box opens completely, allowing the cigar out …victory!
The locking mechanism is indeed fairly simple and Eric’s done a lovely job of building it into the two ends of the box rather elegantly – hiding the mechanism entirely except for a little peek when it’s opened. Having said it’s fairly simple, it is a bit unusual and I’ve seen very seasoned puzzlers spend a little while trying an awful lot of things before finding the right attack. There’s also a neat little variation that is beautifully hidden and if you don’t find that little feature, it’s going to keep you out for a long time!
If this is the first and simplest in the series, it’s bound to be a great little set of puzzle boxes…looking forward to the next one now…

If you'd like to see what some other folks think about it, take a look at Rox's blog over here,and Brian's over here.
Posted by allard at 18:58