Wil Strijbos handed me a little something special to add to my collection at Peter Hajek’s EPP. It looks like a standard Dino-in-a-Cage puzzle – in fact it looks remarkably like the one that Bruce gave me a little while ago – except that some wag has gone and introduced a Japanese puzzle box into the cage as well, and marked it out as something special with the words “Special Edition Prague 2008” across the top of the cage. 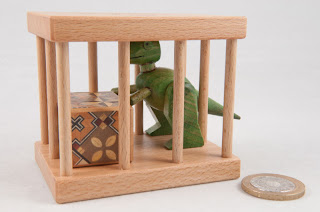 A quick glance at the puzzle makes me ask Wil my first dumb question “Is it a puzzle, or an impossible object?” – sometimes it’s wise to ask Wil these things, sometimes it isn’t – because he has a wicked sense of humour! This time however he appears almost hurt by the question … as if he’d do something like give me an impossible object and let me think it was a puzzle … I mean, really...as if!
Wil just smiles and says that it’s a puzzle – something he came up with between IPP in Japan and in Prague – something to bring the two events together in puzzle form, as it were. The standard Hedgehog-in-a-Cage puzzle has been well known in the Czech Republic since the 1940’s when it was popularised in a widely-read comic (how many puzzles can you say that about?!). Although the puzzle originated in the USA, I think it’s fair to say that it’s been pretty much adopted by the Czechs and it has become one of the most recognisable Czech puzzles around today – although Vinco is certainly doing a fantastic job of mounting a challenge to that.
Right, back to the puzzle – the standard Dino-in-a-Cage is a neat little challenge, presenting you with an object seemingly too big to get out between the bars of the cage, and yet, with a bit of manipulation of the dino, you can do exactly that – and you’ll find that there’s just enough wiggle room to let you do that … then Strijbos goes and puts a Japanese puzzle box in there as well … and it’s pretty clear that you can’t magically make the box any smaller – hence my first line of enquiry about impossible objects. 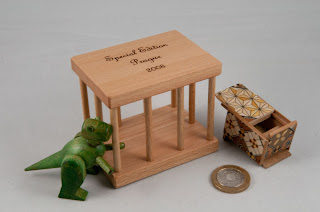 The next thought that strikes me is that Wil’s the sort of bloke who’s rather adept at making one puzzle that masquerades as another – so I start feeling my way around the bars of the cage trying to identify any play in there that might just hint at a removable bar or three – Wil just smiles knowingly at me and says nothing – and I get the impression I’m doing exactly the right thing (from a puzzle-designer’s perspective) and exactly the wrong thing (from a puzzle-solver’s perspective) at the same time. Suffice it to say that I get absolutely nowhere that afternoon and pack it away in my rucksack for later solving…
…which turns out to be back at home the next afternoon. This puzzle really gives you all the main ingredients of a great puzzle in my books: you start with something that looks impossible, you find a couple of avenues to explore and play around for a little while, develop one or more of those ideas and then stumble across something (your approach may well be more scientific and less reliant on luck than mine!) and have one almighty “A-Ha!” moment and then complete the solution.
For me the “A-Ha!” moment came when I stumbled across something I wasn’t really expecting and realised what he’s done – it’s still anything but trivial once you’ve realised that, and in fact there are a few really tricky bits to follow – not least of which is just the standard get-the-dino-out-the-cage bit.
Working out how to get those two items back in there is an interesting little challenge too, especially if you aren’t absolutely methodical in taking them out – and that would probably have spoilt half the fun, eh?
Wil’s taken a fairly good puzzle and made it great by adding the extra dimension – definitely a puzzler’s puzzle and a wonderful addition to my little collection of Strijbos originals … thanks Wil!
Posted by allard at 16:53