I met Peter Wiltshire for the first time in the bar of the hotel on the Wednesday evening at IPP32. I’d ‘seen’ him on the Renegades forum as Arc Light where we’d swapped the odd comment about puzzles and puzzling, but this was the first time we’d talked, and within minutes of being introduced to him, he’d given me a copy of Hidekuni Tamura’s Sway Cube that he’d made in maple and walnut. 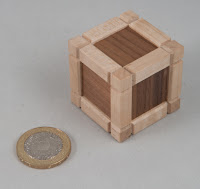 He explained that at his first IPP, Ginda, one of the IPP veterans had given him a copy of her exchange puzzle because it was Peter’s first IPP, as a way to welcome him to IPP and in the hope that he might continue the tradition of giving first timers a copy of your exchange puzzle ... now even though Peter wasn’t actually exchanging his own puzzles this year, he’d made up a few copies of the Sway Cube and was presenting them to some of us newcomers ... gosh!

I sat and fiddled with it this way and that and didn’t get very far at all ... at one stage I voiced a theory that the rattling inside was just there to put me off and Peter just smiled ... I finally managed to open it later that evening in the hotel room – and I was wrong – dead wrong.

Thanks Peter, it’s a tremendous little puzzle that has been excellently made – the tolerances are spot-on and they leave absolutely no clue as to how it’s going to open. Thanks for continuing the tradition and while I almost certainly won’t be able to craft something like that myself, I shall definitely continue the tradition.  :-)

Stephen Chin, or Chinnomotto, is another Renegade I’d been looking forward to meeting at IPP. Chinny is a dentist form Australia known for his awesome lathe-working skills and wicked sense of humour. He’s been making off-beat puzzles for years, often cannibalising the electronic bits from musical greeting cards to add a little surprise to his puzzles. This year’s entry in the Design Competition was a little mouse house that nipped your finger when you did the obvious and then you had to listen to the mouse inside the house laughing at you! :-) Classic Chinny! 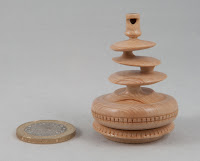 One evening in the competition room Chinny gave me his last mini wobbly top ... he’d been writing about creating these little beauties on the forum and everything I’ve read about them talks about the (literal!) dangers in producing them – after all you have to deliberately put the wood off centre in the lathe and then work the spinning projectile-to-be while it’s trying to free itself from the chuck – that takes a special sort of nutter! Step up to the plate master Chin!

The detail on this little top is astounding: three off-centre spindles supporting three lop-sided and off-centred plates, culminating in the little Chinny trademark whistle in the top, complete with decorative chattering around the base and on the delicate little reversible stand. Spin it and look at it from the side and it looks like a blur, with what looks like a pair of spindles while the whole thing gently wobbles around. Totally unique – entirely Chinny. Thanks mate! 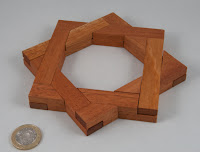 I met Ginda Fisher (the one that Peter blamed for that tradition above! :-)  ) while Nick Baxter was sorting out how to get the Design Competition entries back to their respective creators. I’d read somewhere that she was also an actuary, so we chatted a little about our respective lines of work. Later that evening after the Awards Banquet she came over and presented me with a copy of her IPP29 exchange puzzle, Trickier Trivet.


This lovely puzzle was made by Kathleen Malcolmson in mahogany (I think!) and it consists of a pair in interleaved squares, with each side being a separate piece of wood.

The series of notches as the various crossings and intersections are designed so that there’s one way to assemble this trivet properly ... and I can attest to the fact that there are a lot of ways of almost assembling it – getting seven pieces assembled only to find that the last piece is the wrong shape... and even when you do find an assembly that should work for the last piece, sod’s law says that you can’t finesse that final piece into place, so you need to chase the pieces around the circle one at a time until you get to the one piece that you can insert at the very end ... it’s a really cute puzzle, and as Ginda pointed out, you can actually use it as a trivet in the kitchen!

Thanks Ginda, but I’m afraid this one’s going nowhere near the kitchen! :-) 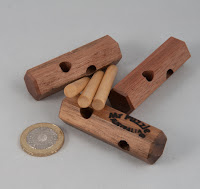 I also met Brian Young, aka Mr Puzzle at IPP32 for the first time, we’d chatted a bit in the Competition Room and I’d given him one of Louis’ impossible cards, then at the Founder’s reception he came barrelling across and proceeded to shower me with puzzles, including a wonderfully simple, irritatingly hard Stewart Coffin design. It consists of three identical hex sticks (OK one has a Mr Puzzle brand on it, but the shapes and holes are identical!) and three dowels ... even though they come with no instructions, you inherently know that you’re supposed to build a structure that has the dowels through the holes in the hex sticks and you’ll know when you’ve found it!
I spent ages experimenting and getting nowhere fast – the one structure I had managed wasn’t at all satisfactory and I knew it couldn’t be the answer, and it was only when one of the better puzzlers at MPP had a crack at it and came up with a far more pleasing structure that I was pretty sure that was the right answer ... when I got in touch with Sue, she told me that is was Stewart Coffin’s design 81A, a variant of the Nest Construction set #81 ... and that the description was: “As simple as it gets. 3 sticks and 3 dowels. Go together one way, or two stick and two dowels another way. A few made around 1988.” So not only had I not been able to find the main solution, I’d totally missed the fact that there’s a construction for 2+2 as well – and it’s just as neat!

Sue also mentioned that Brian had knocked them together from the off cuts from his other recent hex stick creations over here  – fantastic use of the off cuts, Brian! Thanks...
Posted by allard at 14:51