A couple of weeks ago I had a really amusing email from Wil saying he’d been travelling around the Netherlands and was having lunch when he’d suddenly had an idea for a new cola bottle puzzle – one that celebrated IPP32 , and he had called it cola bottle #7 … which confused the heck out of me because a couple of days earlier I’d read a review of Wil’s cola bottle #7 on Jeff’s blog … and I recognised it as one of the bottles I have on my shelf already. Confused, I traded a couple of emails with Wil that resulted in him admitting that there had already been a cola bottle #7, but this one ‘needed’ to be cola bottle #7 even if it happened to be the eighth one in the series … sometimes Wil can be a little enigmatic, so I left it at that…

A few days later, he was posting me a few other things and he knew that we were heading for another Midlands Puzzle Party so he added a cola bottle #7 / 8 to the package and asked me to take it along to the MPP for folks to play with…

When the package arrived, I had a jolly good laugh as I opened it and found the cola bottle in question – it is most definitely a new Strijbos cola bottle!

Technically, it should be cola bottle #8, but there are 7 things inside it…

Back in the posts about IPP32 I told the story about Wil catching me (and one or two others) out with a variant of my Peppermint Twist puzzle … turns out there have been several variants with an increasing number of strands in them, but High Five was the one that caught me hook, line and sinker!

…and staring at me from inside this new cola bottle was a pen from the IPP hotel, a marble and an assembled copy of High Five! I literally laughed out loud when I first saw that…

It went down pretty well at MPP7 a couple of days later, although several folks were a bit tentative when it came to trying to extract the High Five, as it won’t come out in the assembled position… and the thought of having to reassemble it inside the bottle was a bridge too far for some… 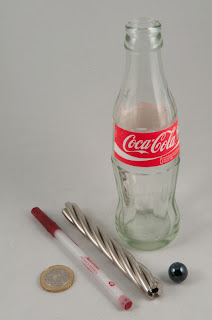 Chris’ dad had no such qualms and waded in, and out again – quite successfully, and to be honest I took a fair amount of courage from his success … it is a bit fiddly, and strangely some of the things that you wouldn’t think would be fiddly, are … like just getting the first thing out of the bottle … everything tends to want to come out at the same time, and as a result they tend to jam one another in the neck and stop anything from coming out … but once you get something out, it makes getting the others out a lot easier… of course it won’t be nearly as easy getting things back together again inside the bottle… and I’ll leave the interested reader to work on that…

... and if you decide that you want to have one of your own to experiment on, drop Wil a note – he doesn't have any of the IPP hotel pens left, but I’m sure he’ll be able to find a suitable substitute!

…even without the back-story and the in-jokes, it’s a cracking puzzle! With them, it’s irresistible…

Strijbos cola bottles - a quick summary
After all of our confusion over the naming of Wil's cola bottles, he sent out a plea for help to "those that know" and it was duly answered by John Rausch and between them they produced the following pic and a brief summary of the generally available Cola Bottles - be warned there have been several specials and one-offs just to confuse things ... so here you are for anyone who's interested:

The (current) Complete(?!) list of Wil Strijbos cola bottle puzzles:
The information came with the usual health warning from Wil: not all of these bottles are always available ... so if you're trying to complete a collection of them, you may need some patience.
Posted by allard at 07:42