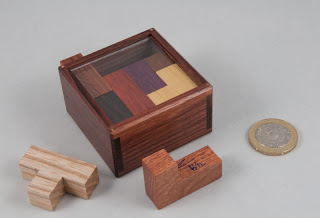 The Rattle  is one of the latest crop of offerings from Eric Fuller – I was lucky enough to pick up a copy of it from him at the greatest puzzle party in the world … I was pretty sure at the time that I hadn’t seen him offer it before (he had a few items for sale that I’d recognised from earlier offerings) so I just assumed that he made some specials for sale at IPP32 … then when he announced his latest round of offerings, there it was, so I guess I was just able to pick one up a little earlier…

Eric mentioned it was a Stewart Coffin design and that, together with its great looks, was enough to sell me on it. [Although I’m still kicking myself for not snapping up the Tornado Burr he had for sale as well!]

The Box has two acrylic sides providing a great view of what’s going on inside. The inside dimensions are  4*4*2 units and there’s a single hole allowing pieces in and out and it is 1*2 units … which means that every piece can be taken out  with the exception of the ‘V’ shaped piece because it’s flat in the box and the 1*2 slot is vertical … and Eric’s tolerances don’t allow pieces to be flipped into that plane.

The box comes with the pieces mostly inside the box, but having a unit or two sticking out of the slot and your goal is to get all the pieces fully inside the box … removing the bits isn’t too fiddly and a little experimentation will convince you that depending on how many other bits are in there at any point in time, some pieces can be swung into position. As you get toward the end-game, however, they need to be able to slide into position without changes in orientation (those tolerances won’t allow it!). 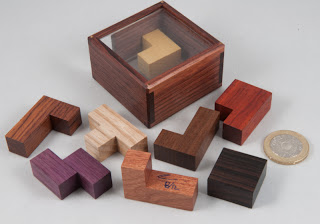 My strategy for finding solutions resulted in me building little structures on my desk, allowing for the “V” shape somewhere in a corner and then working out whether it was constructible within the confines of the box … you can make a couple of simplifying assumptions about the most likely pieces to add at the very end, and that definitely reduces the potential number of assemblies – but there are still quite a few… and almost all of them aren’t achievable!

Eric’s done a excellent job on making these – the pieces are made in an array of beautifully coloured woods, the fit is superb and it provides an great little challenge. [Oh, and they all sold out in less than a day!]
Posted by allard at 11:32