I think this is my third year of participating in the Karakuri Club, and I wasn’t disappointed. I still love the idea of getting a number of brand new, unseen puzzle boxes just in time for Christmas – at a price that seriously cannot be beaten – the only catch, if that’s what it is, is that you pay up front and literally have no idea what your chosen craftsman will produce that year. Gill managed to intercept the package while I was at work and made sure that I didn’t give myself an early Christmas present, hiding the box under the tree. 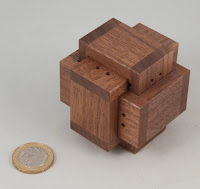 As it turned out I got to open my Karakuri presents a few days after Christmas when we were back down in Brum after spending Christmas with the family up in Glasgow.

I subscribed to five craftsmen this year:


Akio Kamei produced a variation on last year’s Christmas present which I expect will end up being called Expansion VII (or something similar if I’ve lost count!). Physically it looks identical to last year’s gift although the mechanism is a bit different. It draws on some of the ideas used in earlier Expansion boxes and adds a new twist that makes things work a little differently.

It’s not a particularly tricky puzzle box to open, and the space inside is pretty tiny, but it’s a nice addition to the series and makes for a good extra little challenge alongside the other Expansion boxes in the collection. 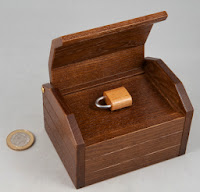 Tatsuo Miyamoto gave us a rather fun looking Treasure Chest with an obviously hinged lid on it. Opening the lid reveals a wooden padlock that is loosely attached to the top of the box – it seems to move although that doesn’t appear to be all that useful.

Hunting around reveals one or two more interesting aspects of the chest until you find a way to release the treasure inside, one more move and you’re done. It’s only a handful of moves in total but some of them are rather nicely hidden. I thought it was a wonderfully whimsical little puzzle box and I’ve taken the opportunity to add some treasure to it for future puzzlers to discover their own loot. 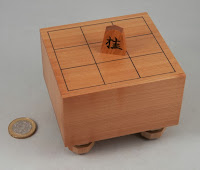 Shiro Tajima’s puzzle box comes in the form of a tiny Shogi table with a knight (and promoted knight) playing piece. At first the box seems totally impervious to almost any form of attack, even after you’ve noticed that the token seems to have an embedded magnet and there are some magnetic hot spots dotted around the playing surface.

I spent ages fiddling around without much of a clue before I managed to get one panel to move just a little – and it remained like that, taunting me for a day or two until I finally managed to work out the second set of moves required to open the panel fully… I’m still not sure I understand the logic behind the moves (I suspect there will be a clear reason for the moves if you understand how to play Shogi) but I’m happy that I understand how the box needs to be manipulated to open and close it properly… this one’s reasonably tricky though… 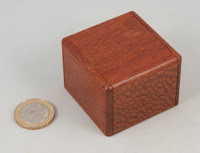 Hideaki Kawashima gives us another Ring Box (Ring Box 2?) after the one which appeared for sale on the Karakuri web site earlier in 2013. This one looks a bit different given the lovely wood it uses.

No problem I thought, I’ve seen this one before: slide a few panels to open the box – tick – find that the ring is securely trapped – tick – release the ring… except that the method for releasing the ring on this one is somewhat different to that used on the first version, and had me tied up in knots and thinking © for quite a while until I noticed something subtle, and then tried something a bit less than obvious to find the ring released. Job done. I like it! 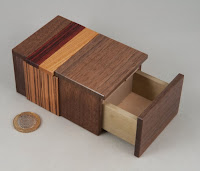 Lastly, but definitely not least is a drawer with two sliders from Hiroshi Iwahara. This one had me stumped for ages! The drawer merrily slides out under the merest tug of gravity … the two sliders on the top of the box will slide back and forth with apparently no use whatsoever, and in case you think this isn’t really a puzzle box at all, there’s a little card in the box that points out that the drawer is partitioned and your goal is to get to the second part of the drawer.

It took a long time and a fair amount of experimentation for me to get one of the sliders to do anything unusual at all, and even longer to get the second one to do anything interesting – getting them both to behave, at the same time, turned out to be the key – and it took a lot of methodical experimentation to get there – definitely the most challenging puzzle box in my presents this year. Oh, and it resets instantly – nice touch!