Our flight into Charles de Gaulle on Tuesday was relatively dull and boring – the best sort of flight – and the short cab ride got us straight to our hotel on the left bank – or Rive Gauche if you want to sound like a local… at the hotel we immediately find our recent visitors to Barnt Green lurking in the lobby along with Nick, Peter and Lesley… 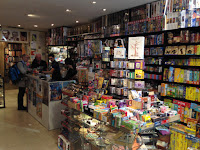 We check in and unpack before heading down to catch up with everyone, grab a bite to eat and a coffee at the Starbucks in the lobby – Otis is going to like this place! I catch up on Saul’s news (he’s had some lovely young lady jumping on his chest apparently, but he’s doing a lot better now and is certainly a lot more chipper than the last time we’d been in Paris together – his heart now beating at a good pace).

Gill and I end up in the organisers’ office stuffing welcome packs with brochures and maps (mainly in the puzzlers’ chosen language, but we decided that some of them really should learn a new language and gave them some help) and helping to sort out the t-shirts that had helpfully been rammed randomly into boxes by the suppliers. 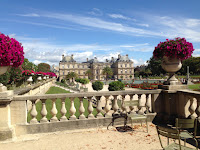 We catch up with the gang about an hour after we were supposed at L’Alouette – we’d eaten there in March and were looking forward to going back again as the grub is terrific! We order as soon as we arrive and somehow we get ours at the same time as the others who’ve been there for ages… I have a fantastic burger and John raves about his ravioli so I make a mental note to try that later in the week.  When we get the bill, Nick does the sums and announces what we owe… so we all chuck in and Judith gets thoroughly fleeced – we realise there’s something amiss when the last few people tot up the takings and find they don’t need to put anything into the pot… Susan checks the sums, corrects Nick’s error and we manage to split the bill fairly equitably. For a bunch of international puzzlers we seem to struggle with numbers! 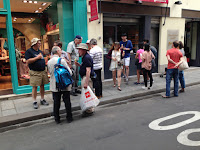 We chat and puzzle in the lobby for a while after dinner – several of us try our hands at Markus’ three-layer maze and all manage to fail spectacularly… I decide it’s probably impossible. (Markus’ puzzles are never simple, but generally also not impossible…). I crash early knowing that Gill’s going to need to be up early to lead the Fabric & Fibre tour…

The alarm does indeed wake us early on Wednesday (and it’s painful, already). Breakfast in our own IPP dining room feels like a big reunion – getting to see friends from all around the world again.

After breakfast Gill and Paulette lead a tour of crafties around the stores they’ve chosen on the recce back in March – the first official IPP37 tour is underway and it feels like a bit of a milestone. (For the record, everyone seems to have a fab time with several people who were just going along for the chat buying a kit and learning a new craft because there was an expert in the group who wanted to teach them… it’s just that sort of group…)

Back in puzzle-world, a couple of us head downstairs in the hope of finding the Design Competition room open for business, instead we find Nick and Gary about to start setting it up for business, so we join in and soon enough have sixty-odd wonderful new designs all laid out and ready for puzzling. At that point we virtually have the room to ourselves and I reckon you can tell a lot by the puzzles that Neil, Peter and I each made a bee-line for.

I met up with Lionel in the lobby and we introduced ourselves – I’d “met” him online through a puzzle forum and we’d chatted a bit so when I realised we’d be visiting his city I suggested we meet up for a chat and some puzzling and he offered to show us around some of the puzzle shops he knew in Paris… when he mentioned that he hadn’t seen any international puzzlers for around 15 years I decided to try and improve his batting average a little and told everyone I saw in the week or so beforehand, who’d be in Paris, that I was meeting Lionel on the Wednesday morning and we were going puzzle-hunting, feel free to join us…

There were 18 of us there to meet Lionel and wander around his city with him…that group included some serious puzzling royalty and later on back at the hotel I was able to introduce him to even more of my friends… I think we improved his average just a bit that day! 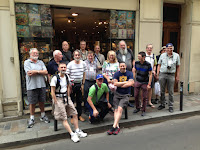 So eighteen of us hopped onto the Metro to the other end of town to visit Variantes, the main shop everyone wanted to get to with fears that the “good stuff” might be gone if we didn’t go there first… we needn’t have worried! Plenty of puzzle-shopping ensued as Wil had clearly stocked them up before our visit – when we were done we all posed outside the store with the assistants for a group photo.

From there we headed north to take some pics of the Notre Dame before searching for some Berthillon ice cream at Haym’s insistence… of course being August, the main outlet was closed, but several local suppliers were more than happy to fulfil all our desires. Wandering west in search of the Joker took us past the beautiful City Hall – heck even the rear of the building is stunning! The Joker turned out to be a bit disappointing as a puzzle store (but gosh it had plenty of games and the like!) and we were beginning to flag so we took over the rear half of a brasserie close to Tumbleweed -which was closed and where the owner has a tongue-in-cheek sign on the door explaining in English that she’s quite lazy now so the store is only open three days a week!. Lionel ended up treating some of us to lunch… merci, mon ami! 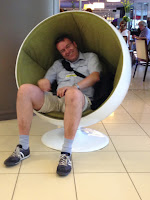 From there we had a bit of a trek in the stunningly bright sunshine to find a Metro station to head out to Rouge et Noir… who stocked some interesting puzzles and a selection of stunningly beautiful handmade spinning tops… Neil bought a couple to add to his collection and left a very happy man.


We walked the roughly one mile back to the hotel, passing a really long queue for the catacombs near the hotel – it seems to be a hugely popular attraction!

Back at the hotel’s Starbucks I grabbed a coffee with Lionel to share a few puzzles with him and managed to introduce him to Gill and several more puzzlers who happened to wander by and say hello… his batting average improves further.

After we say our goodbyes I chat to Gill about the super-successful Fabric and Fibre tour before we find the gang for dinner. A bunch of us find ourselves in a little Italian joint just around the corner from the hotel enjoying pizzas and more… there’s plenty of chat about a project that most of them have been involved in and lots of puzzles are being played with around the table… the waiting staff manage not to show too much interest in the puzzles.

Back at the hotel I spot Wil and give him a jar of crunchy peanut butter that he’d enjoyed so much at our place when he visited earlier in the year… (it’s the little things…) then I head up to his room with a pile of cash and leave again a short while later with a couple of new puzzles including a great little puzzle box and a new assembly puzzle that JCC has made for him.

I hit the Design Competition room once again – this time with a little more success before collecting my crates of exchange puzzles that had arrived via a fellow puzzler's courier service… gawd those things are heavy – I’m going to need a sneaky plan to get them down into the exchange on Saturday without either doing my back in or ruining several pieces of luggage in the process…
Posted by allard at 19:29