Gill and I have a late lie-in and totally miss the cut-off for breakfast so we get a croissant and some muffins at Starbucks… there’s some gentle socialising in the lobby before people begin gathering for the afternoon walking tours. Gill and I are on shepherding duties, sweeping up the rear of our tour group - where importantly, we managed not to lose anyone!

We spend several hours wandering around the Latin Quarter visiting a store of French epicurean delights, tasting wine and cheeses with some lovely local bread at our first stop, before taking in the Sorbonne, old bath-houses and the Pantheon and ending up at a little tea shop with a lot of history.

We find Taus and Isabel and Kevin back at the hotel and we make plans to grab dinner at A’Louette with them… it’s quickly becoming our go-to bistro here. Dinner is great as usual with plenty of chatter about airline crew scheduling and medics’ on-call rostering – obviously.

We spend a while trying hard to goad Eric into agreeing to make some of the cube dissections in the competition in wood by telling him that Tom didn’t think he’d be able to … we’re not sure if we succeeded or not, but if we did, they will be awesome!

Tom Lensch brings me a care package that includes a copy of Oskar’s Space Rings in wood…! Insane! And gorgeous! (Thanks Tom!)

On Friday morning the alarm gets us up early so we can breakfast with the Hutchisons and the Wiltshires before heading toward the buses that take us to a boat on the Seine. We cruise up the Seine and around the Île de la Cité taking in all the lovely sights along the way before parking back underneath the Eiffel Tower.

From there our bus takes us to the Pompidou Centre for a few hours wandering – we head off to find a nearby craft shop (that just happened to be half a block from one of the puzzle stores we’d visited on Wednesday with Lionel, honest guv!) for the girls and have lunch at a little local bagel joint… when in Paris, eat like a New Yoiker! The bagels were brilliant, but the Nutella crepes from a street vendor afterwards were just what the doctor ordered. 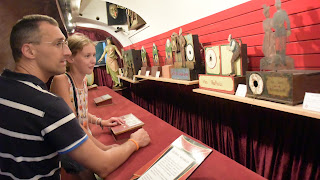 Back on the bus to the Magic Museum for a magic show, a visit to play with their automata collection and a while to wander around the gift shop and the optical illusion and magic exhibits… including a working model of Robert Houdin’s blossoming orange tree illusion – that alone was worth the visit!

A little gentle antique puzzle shopping among the local antique stores before heading back to the hotel… Said a quick hello to Jim K in the lobby (and this time he didn’t tell me he was having a heart attack, hooray!) before grabbing an hour’s kip before the Founders’ reception.

It was great to see Mike and Margaret again after a couple of years… and pick up just where we left off... they’re a lovely couple!

I was very chuffed to get to meet Rainer Popp, the trick-lock-meister… he and Shane and a few of the MPP gang had formed a bit of a clump and I was honoured to join them… and well-gob-smacked when Rainer produced a prototype of his T11 – a gorgeous great big hunk of a padlock… I immediately asked him to take my money, and a kidney, but he was having none of it… he gamely let a few of us prod and poke it and when I found something interesting and remarked to Shane, he just rolled his eyes and said “You have NO idea, mate…” – I think that one is going to be EPIC!

Jerry had brought a copy of a prototype of his 3D version of Burrnova and a bunch of us stood around triggering it and watching it fire off in all directions with a silly grin on our faces… then reloading and doing it all over again… small things amuse small minds… we tried hard to convince him to manufacture them, it seemed only right that more people got to experience that silly-grin-thing!

…and there was close-up magic all around from a variety of people… so much to see and do that I didn’t even make it back to the Design Competition room that evening…
Posted by allard at 07:36