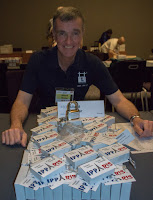 Had an early breakfast with the Canadian gang before heading down to the exchange room with Louis as my trusty assistant, and many kilos of puzzling Haleslocks…

We get into the room and have pretty much unpacked everything and set out our offerings when we’re unexpectedly herded out of the exchange room… we spend a little time out in the lobby before being allowed back in with more scrupulous checks on the name badges this time – it seems some interlopers might have made it through the security checks the first time around.

The exchange starts with my neighbours, Eckbert and Dirk, and pretty soon Louis and I are a finely honed exchange team roaming the hall and exchanging efficiently… 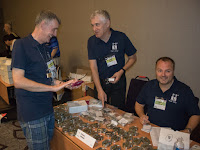 My schpiel improves as the morning progresses and then settles down on: “My friend Shane Hales designed a puzzle lock a couple of years ago and he named it Haleslock 1. A while later he came up with Haleslock 2 and then earlier this year, in a fit of creativity he produced Haleslock 3 – and today, I have for you… “ at which point virtually everyone chimes in with “Haleslock 4!” – except for two wiseguys who went for “Haleslock 5!” and one hopeful, thematically interesting “Haleslock 37” – before I deliver the punchline “Trust me, he’s much better at designing puzzles than he is at coming up with names for them!” – (I know, I know, I won’t be giving up my day job any time soon…) 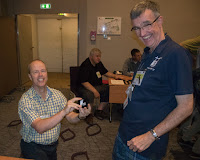 A couple of exchanges really stand out for me:


-          Oskar’s proposal down on one knee to present a puzzle ring that he and Bram had designed was somewhat memorable!

My final exchange for the day is Dario who’d been AWOL for a while so we’d set up camp at his desk to await his return… only for him to come back when we’d wandered off for a while… the others in the queue insisted I went first anyway… nice bunch!

Given I had a few spare exchange puzzles I decided to give John one and to my surprise he said he had resurrected a few of his puzzles and would I like one… ‘course I would! :-)

I manage to pack up all the exchanges into a single suitcase – good sign – and notice it’s a LOT lighter than mine was on the way down earlier that morning.

I went down for Wee-Steve’s presentation on his perspective of the Jabberwocky project, which was interesting… Gill arrived back at the hotel soon after the end of the presentation and we ended up spending a little down-time thinking of Ethel and Laurie – decompressing a bit before the banquet in the evening.

Simon said a few words at the start of the evening and asked us all to remember the happy times we’d shared with Laurie – that was the easy part – there was a lot for Gill and I to choose from – and then we toasted our friend one last time. 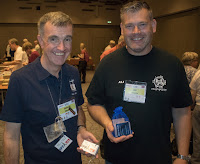 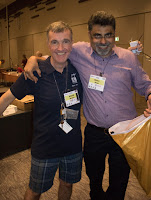 The entertainment at the banquet was superb as usual. A couple of local magicians (including a great act of historic magic by a faceless magician) and a world class shadow artist with a huge repertoire – including a Star Wars segment!

There was a lot of banter after the entertainment, and even a little puzzling… and long after we’d gone to bed the Soap's Fabric & Fibre room is well and truly defiled with piles of beer cans and empty glasses and snack packaging, so Frans sends Gill an email at 3am helpfully suggesting that we rename it the Fabric & Fibre & Beer room ….
Posted by allard at 21:16