Bill Cutler’s Wausau Burrs
Right, so everyone knows that Bill knows burrs – his research into 6 piece burrs is legendary and probably forms the basis of mainstream burr-knowledge and notation in use today. Bill’s used a number of the burrs resulting from his exhaustive research  as the basis for some lovely puzzles, adding the odd twist here and there (“Would sir like ball bearings in that?”) and letting some of them stand on their own (Computer’s Choice?). At some point during this work, Bill decided to try something a little different – and this led to the Wausau series of burrs. 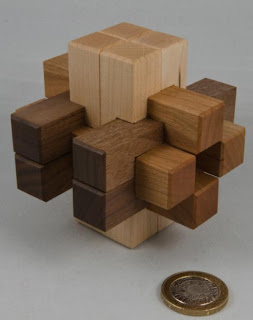 From the outset, you can tell these little guys are different: for a start, each of the major axes has an unusual or even a different number of pieces, in fact across the series, you’ll find anything between 3 and 8 sticks in a plane. (OK, except 5 & 7 – you won’t find one with 5 or 7 sticks in a plane … now stop being picky!)

Not content with just having different shaped burrs, Bill also designed the mechanisms to be ‘interesting’ – so every now and then, one of them will move in a totally unexpected way – in fact quite often, prodding and pulling in ‘the usual way’ won’t get you anywhere … I like puzzles that catch you out by making you assume you ‘know’ something … then sneak up behind you and yell ”BOO!”. Most of the Wausau’s has a “BOO!” in there somewhere.
There are four in the series – numbered ’81 through ’84 (‘cos they were designed in the early 80’s).

The first in the Wausau series has a different pattern of 4 sticks on each plane! It looks different ... fiddling around with it quickly reinforces that ... it only takes a few moves to remove the first piece, however there are a number of false starts and little blind alleys that will keep ham-fisted puzzlers at bay for ages. Bill described this one politely as being “non-trivial to take apart”. 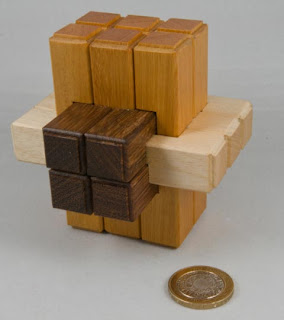 Wausau 82: 3*4*6
There is one that’s often known as the lock-picking one because there’s a bit in the solution where you find yourself effectively trying to “pick a lock” using the pieces in one of the planes as a set of mortises while trying to slide some in an intersecting plane out. The amount of movement is again, unexpected, and will keep overly enthusiastic puzzlers occupied needlessly for hours. Once the lock’s been picked, it’s a pretty straight-forward disassembly… this was Cutler’s favourite of the Wausau series. 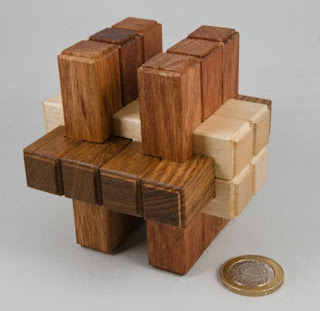 Wausau 83: 4*4*6
Bill Cutler describes this as the best puzzle of the Wausau series – it takes 11 moves to release the first piece and involves a little to-ing-and-fro-ing along the way – there’s plenty of movement when you first start out, not all of it’s useful, however... 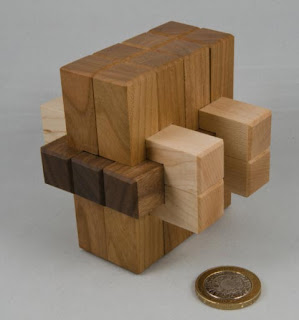 Wausau 84: 3*4*8
This was the last one I received and is an absolute delight – there are a few pseudo-standard burr moves and then you seem to hit a brick wall –prodding and pulling in “the usual way” will get you absolutely nowhere, so you need to start trying more unusual moves – and I have to say that the one that finally does it is a really unusual – almost magical movement. From there on out, it’s a simple matter of removing a piece or two at a time – reassembly on the other hand is quite tricky – mainly because of that funky move, that means you need to get things lined up a bit funky before it all locks together nicely … easily my favourite of the series.

[In case you’re wondering about the different styles in the photographs – I got ’82 and’83 from Mr Puzzle, so you can see Brian’s signature finishing on the ends of the sticks; and then ’81 and ’84 came from Bill, manufactured by Jerry McFarland – and that’s his polishing on the ends ... sorry, I know it’s a mismatched set ... let’s call it eclectic and be done with it!]
Posted by allard at 22:48