Peter Hajek hosted another fantastic End-of-year Puzzle Party last Saturday. This year I decided to drive down to London rather than take the train and the weather definitely played ball – sunny skies made for a very pleasant drive until just before Oxford where three cars had a bit of a coming together in the fast lane – no-one appeared to be hurt, but they managed to snarl up the motorway good and proper! I arrived a bit later than expected to find most of the usual suspects already there.

Peter greeted me like a long-lost puzzler and made sure I had something to drink before allowing me through to see the rest of the gang. Strijbos had set up shop in the conservatory and had a lovely display of aluminium puzzles ranging from his dovetails right up to an Angel Box, along with the usual Constantin array and piles of cricket boxes.

Wil had brought along a few things I’d ordered over the past month or so and I ended up leaving with a fistful of new Constantin n-ary puzzles, a bolt, a copy of Cast Twist and a couple of cricket boxes (the first in my collection).

Several of the others had brought along crate-loads of spare puzzles they were keen to trade or sell and I ended up spending a while raking through all of them during the course of the day. I picked out a copy of the Hazelgrove box as I didn’t have one yet and Duncan had somehow ended up with a spare unopened copy in his “£10 or more” box. Steve gave me a copy of his 3D printed version of Coffin’s HO HO puzzle, resplendent in Stewart’s original yellow, red and blue colour scheme – thanks Steve! 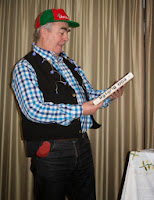 Martin Watson made the mistake of confiding in Steve that he didn’t have space for any more puzzles and must not leave with any new acquisitions – so Steve and I made it our duty to ensure that he failed singularly in that ambition and in the end he left with more puzzles than he’d arrived with – success!

Frans was showing off an interesting corporate gift that his architecture firm had produced depicting a new building they’d been the lead architects on in Rotterdam. Part Kumiki puzzle, part burr, it has the rather distinctive shape of the building and comes with a neat little stand to keep everything together… it turned out he had a couple of spare copies so I helpfully relieved him of one of them.

Oli managed to get rid of some of the puzzles in his crate, but I suspect that he went home with more than he came with.

The afternoon’s more formal activities kicked off with his three picks and a short magic show by Laurie Brokenshire that kept us thoroughly entertained (if not also well-mystified) and then we each took turns to present our three best puzzle finds of the year.

Peter began with his three in order of weight, starting with a small antique Chinese trick lock. He demonstrated the opening mechanism using the oddly-shaped thin, flat “key” and then absent-mindedly threaded the “key” onto the shackle and locked it … and then realised the error of his ways in about a second: with the key locked in that way, there’s no way to open the lock again.

And a little embarrassment.

[Don’t worry, he fashioned a new key a day or two later and it’s back in play again … so he won’t have to settle on another best find of the year!] His next two finds were somewhat larger, and decidedly heavier – an antique writing slope with multiple hidden compartments and a copy of Berrocal’s Goliath.

I was up next and (in order of weight in deference to our host!) nominated Derek’s Helical Burr, Rob’s Borg Box (I know it’s old, but I only managed to acquire one in 2013!) and Wil’s Angel Box.

Some of the other stand-outs for me included a gorgeous pewter “African Puzzle” that Steve presented along with a new wooden puzzle from the Hayducks. A couple of folks presented the Popplock T8 and Martin Watson gave his usual highly entertaining presentation including the “Ego Buster”, complete with some rather amusing faces on the front of the box – something we felt the need to replicate for an unofficial group photo later in the afternoon.

Ali and Duncan both presented the Bucolic Cube  from this year’s Design Competition and several folks had a bash at them during the course of the afternoon – at one stage John Davenport was puzzling away furiously, oblivious to the fact that Frans was sitting next to him with the solved puzzle in his hands. 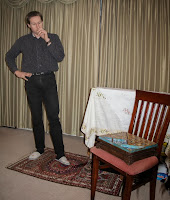 Frans presented a wonderful Swiss box with a really unusual mechanism that I’d seen at the DCD along with a set of well-old Chinese Tangram plates recently brought back from China by one of Peter’s colleagues. 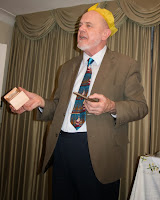 Once all the presentations had been concluded, Laurie dressed for dinner and we all wandered off to the kitchen for the traditional Hajek puzzle party spread – and awesome it was! There was a lot of chatting and chomping in the kitchen before we decamped back to the lounge for a quick talk by Tim Rowett on vanishing area / vanishing object puzzles / paradoxes. It was fascinating seeing the development of the ideas starting out in mathematical texts hundreds of years old through to recent developments including the never-ending slab of chocolate that Laurie had presented earlier in the day.

After the talk, plenty more raking through crates of puzzles, playing with some of Peter’s incredible collection and just plain catching up with folks we hadn’t seen for a while ensued before things wound down and we headed our separate ways (and there weren’t any idiots clogging up the motorway on the way home!).

Another wonderful EPP – Thanks Peter for a grand day’s puzzling!