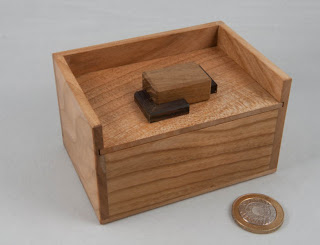 When Louis came over for MPP3, he gave me a copy of this classic packing puzzle designed by Tom O'Beirne – I’m not sure who made this copy, but I suspect that it came via a Dutch Puzzle Purveyor of note by the name of Wil. I really like this version as the extra block masquerades as a handle for the sliding lid on the box when in the unsolved state.
The premise is pretty simple: you get a box with a sliding lid that has a wooden block incorporated into the lid. Inside the box, there are eight blocks of differing sizes that pretty much fill the box – your mission – should you choose to accept it not wimp out – is to put all nine blocks inside the box such that the lid can still be closed. 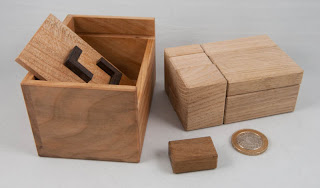 Your first reaction is more than likely going to be something like mine was: Clearly there’s been some sort of mistake here! There’s no place inside the box – let alone enough space to fit another block the same size as the smallest block already in there! Ah wait a minute – I’m just seeing the top layer – there are probably some gaps in the bottom layer, so tip the pieces out carefully and observe. Nope, I was right the first time – there must be some sort of mistake here because the bottom layer is as tightly packed as the top layer ... time to Think(c) [Revomaze forum in-joke – sorry, couldn’t resist!]
OK, engage brain and step up the mental processing a couple of gears – notice that there’s a little bit of play around the edges when the pieces are in the box – and there’s a tiny difference in height between some of the pieces in the unsolved state in the box  ...  at least some of which is disguised by the slight bevelling on the edges of the blocks – sneaky!
Closer inspection shows that some of the things that look like they share the same dimensions, don’t– but they literally differ by mere millimetres - and yet that’s the key to the solution. It turns out the starting position is rather a sloppy fit compared to the solution – even though it looks quite snug.

A bit of experimentation with the various bits will show you which combinations are the most ‘efficient’ and extending that gives you a pretty neat solution – that really will allow the ninth block to visibly melt into the box that was ‘full’ when it had eight blocks in it at the start.
A classic puzzle that verges on proving the impossible ... thanks Louis!
Posted by allard at 20:51