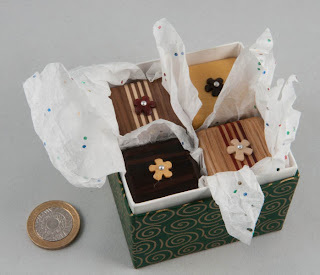 Until quite recently I hadn’t had the opportunity to spend much time exploring Perry McDaniel’s incredible handiwork. Sure, I’d spent a short time playing with Oli’s set of Sandfield Salt and Pepper cellars at MPP2, but I hadn’t made any progress on them so I only really saw the outsides … I’d seen some pictures from an IPP of a rather flamboyant looking guy in chef’s whites offering a plate of (wooden!) petit fours to (unsuspecting?) puzzlers and a few close-ups of said cakes and they looked yummy, so when I found a set of Perry’s Petit Fours available, I jumped at them – and if anything found that they look even better in real life.
Perry’s four petit fours make a great little set of really beautiful puzzle boxes – they not only look the part, they’re exactly the right size and shape, and they literally look good enough to eat! (I’m going to avoid the obvious comparison to the Karakuri cakes, because these are in a class of their own.) 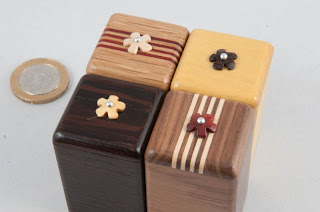 Each of the four boxes makes use of a totally different opening mechanism.
I found one to them to be similar to a traditional Japanese puzzle box, although the shape and visual clues on the box did a pretty good job of putting you off the scent and I was actually quite surprised when it turned out to follow a ‘standard’ opening scheme … the other three are very different and each relies on a unique idea that I haven’t seen in a puzzle box before. (I’ve clearly had sheltered puzzle-upbringing!)
Overall – a beautiful little set of exquisitely manufactured interesting puzzle boxes – each individually branded and numbered by Perry – simply scrumptious!

Now I just need to keep an eye out for petit four number five that made its appearance in Japan last year…
Posted by allard at 10:23