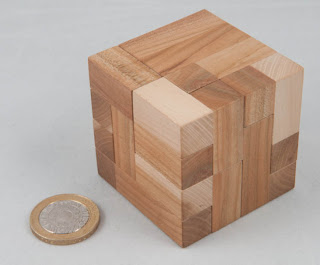 I picked up a lovely copy of William’s Wonder from Kayleb’s Corner earlier this year and I’ve been meaning to write about it for ages. This 4*4*4 cube was designed by William Waite and I’m pretty sure that this example was made by Pelikan. It looks like a nice honest cube, although some of the shapes around the outside suggest that it’s going to be at least a little unusual.
Finding the first piece that moves is fairly easy – prodding and poking around randomly will eventually identify a piece that slides upwards (identifying the single void in the cube, in case you’re interested). From there, noting what’s moved you should be able to work out what should move next, right? After all, if this is a serially interlocking cube, then it must point you in the right direction ... except it doesn’t seem to! You can see where you’ve opened up a gap – you know the next move must then use that gap, but all the pieces around the gap don’t appear to move ... ratfink! 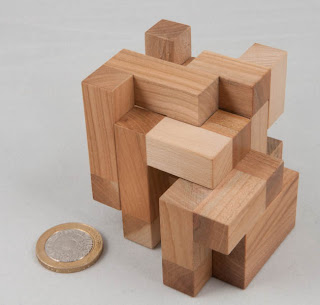 Sneaky chap that Waite guy – the way he’s designed the pieces, you’re virtually assured that for the first while you’re going to be tugging on either ends of the same piece, or trying to push two bits of the same piece toward one another ... and the crafty chaps who made this puzzle have added another layer to that by deliberately throwing you off the scent in the way that they’ve chosen to align (or not align!) various blocks that form the individual pieces.
Right, so once you manage to get over the not-so-obvious (to me, at any rate!) pitfalls and find the second move, you can expand the five bits of the cube until the fifth move allows you to remove your first piece.
I know that I’m relatively new to these sorts of puzzles, but the designers’ ingenuity really amazes me – how they can come up with such unique, complicated interlocking schemes within the confines of a 4*4*4 cube is impressive. 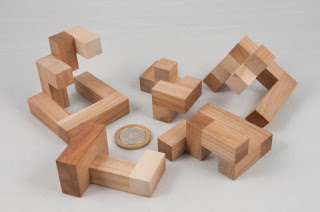 William’s Wonder is a delightful cube that draws you in by giving you a really simple, easy to find first move and then holds you hostage for ages while you try and find the second move ... highly recommended, if you can find one!
Posted by allard at 21:47