John Devost ran an interesting auction on Puzzle Paradise a little while back offering twenty Tea Box Puzzles jointly made by Robert Yarger and Kelly Snache. I was delighted when I received the usual notification from John’s auction site telling me I’d secured one of the boxes, and even more delighted when I received an email from Robert saying that the auction software had confused itself a bit with the sort of auction being used and I’d actually paid a lot less than the initial email had suggested - bonus! 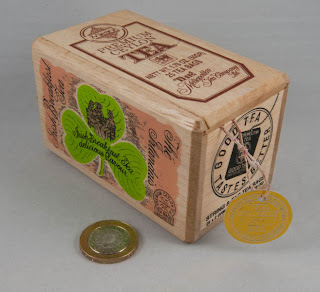 The auction described the Tea Box as a real olde worlde wooden tea box that has been retro-fitted with a puzzle mechanism – as is Kelly’s usual want. He uses a lot of reclaimed timber, boxes and the like to create his rather unique puzzles. He stumbled across a collection of these boxes and snapped up the lot of them, certain that he’d find something interesting to do with them ... some have already turned up as puzzles (Granny’s Tea Box) and hopefully more will follow. They’re fairly small, very rustic (the insides haven’t been sanded, at all) and as per the auction description, “ooze charm”! The Tea Box Puzzle has a sliding lid that is firmly locked in place and has a loop of string coming out of one end with a gold tag hanging from it.
A week or two later the postie left a box on the doorstep and I was off and playing.


In the meantime I’d chatted with a mate about his Tea Box and he’d mentioned that he’d had a bit of a mishap with it and was planning to get hold of Robert to ask about fixing it ... and I’d also read Jeff’s blog post about his experiences with his Tea Box – so I’d been forewarned to be careful with it when it arrived.
On the first evening I had a bit of a tentative play around with it and opened the first lock and started playing with the second. I picked it up again while I was having breakfast the next morning and started fiddling with the string, and before I knew it, I’d done what everyone else has done and locked it up for good. I jotted off a quick apologetic email to Robert and asked if I could have some instructions on fixing it – and by the time I got home from work, I had chapter and verse on how to fix it along with a couple of useful pictures from Robert. 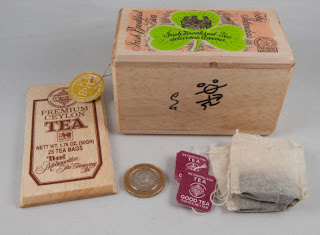 Unlocking the box from that state required a couple of improvised tools and a total of around five minutes to effect the entire repair ... I’ve put a drop of superglue on the knot in the string now, and I reckon that will stop a repeat of my little mishap. [Word to the wise out there: if you have one of these, and haven’t already done so, put a spot of superglue on that knot! You’ll thank me later.]
In the course of the repair I intentionally removed a stopper on the lid so that it will now slide all the way off – to allow puzzlers to see the mechanisms inside there ... there’s one little item in there that deserves to be on show, and if you don’t break your box like I did, it will never see the light of day, and that’s a shame, in my view...


Nobody likes to have a puzzle box break on them (and some of us dread having to try and fix them due to our lack of woodworking skills!) but I think I can honestly say that it hasn’t reduced my enjoyment of this little box at all – in fact I really think the final result allows for even more enjoyment ...


Thanks guys – great first project and thanks for the tea bags you left inside the box! I’m really looking forward to seeing what the duelling duo produce next!
Posted by allard at 21:20