I recently managed to acquire a Stickman Snowball Puzzlebox. (Yeah, yeah – that same Cubic Dissection Auction I’ve been yabbering on about...) The Snowball is based on its smaller cousin, Snowflake, which was Robert Yarger’s 2006 IPP Design Competition entry. Whereas Snowflake was made in holly and just over 1.5” cubed, Snowballs are considerably larger(!) at 3” cubed and come in holly or walnut.  Some Snowflakes were initially given away as gifts with ribbons attached so that they could be used as puzzling Christmas tree ornaments and a bunch were sold through Cubic Dissection back in 2005.
Snowballs appeared in 2009 and seem to have been made in a smaller run – and given the added size and weight, I suspect that nobody has used these as tree ornaments! [...and none of them came with a loop of ribbon attached to them.] 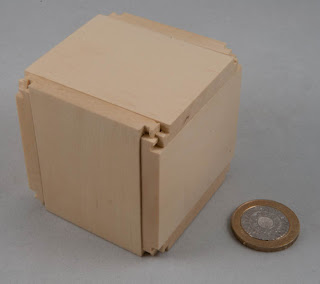 From a distance, an unsolved Snowball looks like a fairly plain box with six unadorned slab sides – close up, the detail in the corners is pretty mind-blowing: when all the panels are closed properly, each corner appears to have three sets of interlocking orthogonal rails – and your brain will instantly tell you that if seeing is believing, and each corner looks like that (they do...) then opening this box is impossible ... great start!
A bit of experimentation will get one of the panels moving – allowing closer inspection of those tricked-out corners ... very neatly done Master YodaYarger! Having slid one panel across releases the next panel, however, to my mind at least, the next move has a panel going “the wrong way” – my mind tells me that a panel with that shape and those cuts should not move in that direction, it should move in the other direction ... and so it continues! 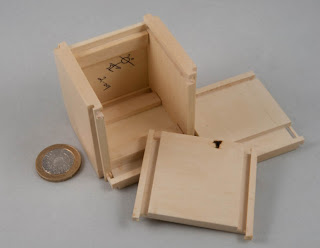 A bit of backwardsing and forwardsing and after seven moves, the ‘lid’ can be slid off ... and from there you can slide out each of the remaining panels as well, giving you a neat stack of six panels.
At this stage it’s worth talking about those panels – a couple of them have sticks glued to them to limit certain movements, but on the whole, these are “simply” planks that have been cut in precisely the right place to create a set of interlocking rails and sliders and that astonishing corner detail. The efficiency of it is simply staggering – and I really get why Robert reckons that Snowflake was the closest he’s come to his idea of a perfect puzzle box: nothing is wasted in there ... very clever design Robert!
Posted by allard at 07:41