I suspect that I have a soft spot for cute, unloved puzzles – or that’s how I think I explain how I ended up buying My Butter off a recent Cubic Dissection auction. Halfway through the auction I noticed a few puzzles hadn’t attracted any bids yet, despite their starting bids being well below their current price (and indeed recent auction prices!) – so I found myself placing some modest bids on a few apparently unloved puzzles … it turned out soon afterwards that most of them weren’t nearly as unloved as I thought they were, and I was soon outbid – but one or two remained relatively unwanted and I was able to pick up a bargain or two – one of them was this really cute little cow called “My Butter” by Yoh Kakuda of the Karakuri Creation Group. 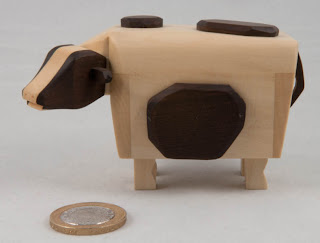 My Butter was originally produced in this blonde version as a 2008 Karakuri Christmas Present. It has subsequently been produced as a brown cow with white spots, and in fact remains generally available today.
My cow had a bit of a mishap in transit, losing her head somewhere over the Atlantic – fortunately the head isn’t critical to the mechanics, so I was able to repair it (and by repair, I really mean glue the thing back on!) with even my meagre woodworking skills.
As a puzzle, it’s pretty straight-forward – in fact you can probably guess what you’re going to need to do by just looking at a picture of the (unsolved) cow. It is however rather nicely made – what it may lack in detail, it more than makes up for in terms of quality finish and fit – definitely up to the usual Karakuri standards! 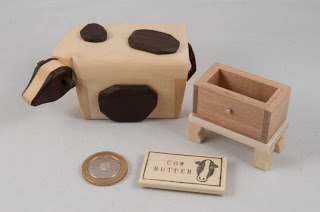 The locking mechanism does have a few little tricks up its sleeve that will slow down anyone not paying attention for at least a little while, and it does require a little coordination. Releasing the locks allows the belly to drop out exposing the little box (butter dish?) inside … one of the bonuses of this puzzle are that the internal mechanism is fully exposed in the solved position, allowing you to see that the finish on the internals is just as good as on the externals. [Most of the other Karakuri boxes I’ve seen leave the internals somewhat hidden, even when the box is opened, so this is a nice treat, I think.]
Locking up the box is a simple matter of sliding the belly back into the beast – and the internals take care of everything for you … neat!
Posted by allard at 18:51