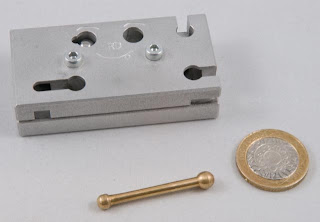 Gesicht (or Face, if you’re Anglish) looks a bit like a stylised face – there are two holes for eyes, beneath which is a mouth with a tongue sticking out and then a series of slots and holes outlining most of he way from one eye around the sides to the other eye…there’s a ball bearing inside the puzzle and a little rod with different sized balls on each end. The ‘maze’ is a pretty simple, straight route, with the only complicating factor being a couple of plastic speed bumps inside the ‘maze’ that mean the ball needs to be encouraged past the bump with the aid of the little rod….so far so good – there are a couple of spots where you need to think a bit about which way up you need to get you rod so that you can do what you want and still be able to retrieve it again, again, so far, so good. 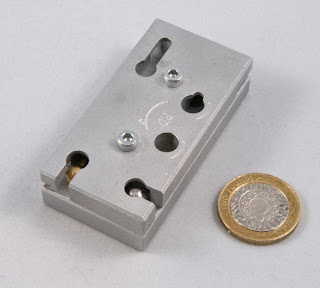 A bit of searching around the inter-web confirms suspicions that the object would appear to be to get the ball from one eye, around to the other and then back again.
All well and good, until you get to one particular final little part of the journey, where you brain tells you that it’s impossible (hook!), so you try getting creative (line!) and then realise that it won’t work (and sinker!).
Several hours later I found myself thinking about it when I had my “You SOD!” moment – fiddled around a bit and confirmed that my solution worked – it’s cute, really cute – it’ll make you smile and probably even make you respond to that little face in kind…
Posted by allard at 22:02