...when I got a note from Parcelforce asking me to pay some VAT on a parcel from the USA – I’ve been tracking a parcel from the States since the beginning of last week – the result of winning a couple of lots on a puzzle auction over on Puzzle Paradise.
A couple of weeks earlier John Devost had announced that he was hosting a puzzle auction on Paradise in order to raise money for Dave Cooper, an Aussie puzzle collector and craftsman of note, whose town had been hit by flooding one week and a cyclone the next. Dave’s home and his local community had been badly hit and his puzzling mates from around the world decided to pitch in and help. John set up an auction with all of the proceeds going to Dave and then promptly donated a bunch of absolutely awesome puzzles... several other leading lights in the community followed suit and donated not only their treasured puzzles, but also stumped up for the postage after the auction... in the end there was a really long list of wonderful folks who’d donated to the auction – those guys are all heroes in my books...
As I said, there were some pretty incredible puzzles available on the auction, and I managed to win four Stickman lots – the parcel I’d been tracking had been some boxes from Robert Yarger’s personal collection, donated to raise funds for Dave. 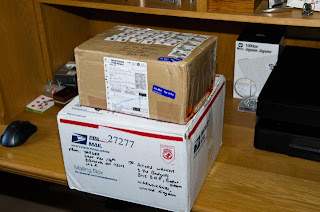 First thing Saturday morning I trek around to the other side of Birmingham to pick up my parcel...and when I get home I find another parcel on the doorstep (yeah, we don’t have a lot of crime around here!)  - this one’s got the rest of my haul from the auction, this time from John Devost’s collection...
I’d joked with one of my puzzle-mates a few months ago about not being ready to grow up yet, and that if I ever managed to acquire any Stickman boxes, I’d be forced to admit that I was probably starting to take this whole puzzle-collecting thing seriously, and that maybe I was growing up after all... (I’ll probably continue to consider myself an enthusiastic amateur though in the light of some of the real collectors out there!). 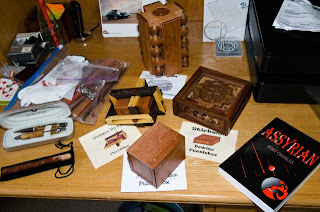 So yesterday my collection of Stickman boxes went from zero to four and a half in the space of a couple of hours ... the grin didn’t leave my face all day and I spent several hours solving them one at a time so as to spread out the pleasure as much as I could, after all, the chances of being able to do that again any time soon, are probably quite slim ... what a lovely weekend. Thanks Robert and John.
Posted by allard at 19:44