My third Stickman acquisition was a Perpetual Hinge Box – also off the Australian Relief Puzzle Auction, so the money went to a great cause thanks to the generosity of one R. Yarger who not only donated the box, but also paid for the shipping across the pond. 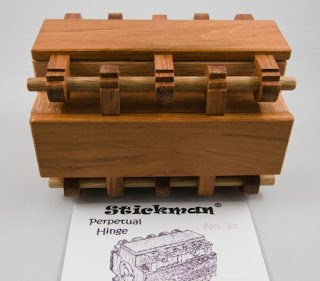 Perpetual Hinge is a nice sized box with a good, solid feel to it. At first glance, it seems to have four doors hinged on dowels around a central core box. The central box has a couple of interesting disks on the ends that sometimes seem to be able to spin freely and sometimes seem to tighten up or lock up … with not much of a pattern discernible. The core box seems to wiggle up and down a bit inside the 4-door-straitjacket and it’s not immediately obvious what stops it from wiggling sometimes …
So, attack this thing logically, examine all the panels individually, fiddle with the disks and generally play around with it for a while until you notice that one of the panels will slide up or down a bit – A-HA! Gotcha! ... So you explore that for a while and get a few of the other panels sliding around – oddly sometimes they seem to interfere, and sometimes they don’t … so you fiddle some more.
After a while you realise that you’ve worked your way all the way around the box and moved some panels, but basically you’re back where you started, and you realise just why the box is really well named – you can easily put yourself into an infinite loop and wander from one panel to the next moving them up and down indefinitely … 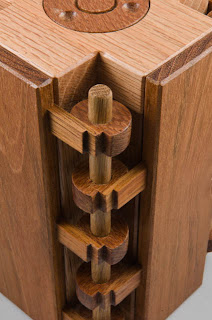 … Right, so at this point I put on my specs and engage the brain and start crawling over it with a fine-tooth comb, and start examining the stuff I’ve ‘overlooked’ [more accurately, not paid nearly enough attention to] up to now, and then spot a couple of interesting little features, features that have been so cunningly hidden that Robert deserves a medal! Armed with that little insight, you can now form a more useful strategy and open the first compartment … which leads you to a really interesting discovery of what those disks might just be doing – you can see some really funky things going on in there that still don’t really make sense (or more accurately – they didn’t to me!).
A bit more work opens the next section and shows you the guts of the box – all those weird movements finally make sense and I’m left with an overwhelming sense that if he’d been a nasty man, Robert could have made that mechanism do a bit more and made it a heck of a lot harder to open – thanks for stopping where you did, mate!
It really looks great, but you’re going to have to trust me because the only pictures I’m going to post are going to be of the outside – you need to earn a view of the insides of this beauty!
Posted by allard at 21:24