Revomaze Silver is quite simply BRUTAL as puzzles go.

Most people will never solve this puzzle. It will remain a pretty, solid, paperweight.
As of writing this blog, several hundred Silver Revomazes have been sold and only 35 of them have ever been opened – more than a year after they were launched.
Silver is billed as a ‘dynamic’ maze, so you’re expecting things that change or move, in fact if you shake it you’ll hear things moving about in there … and none of that will prepare you for what you come across in there! 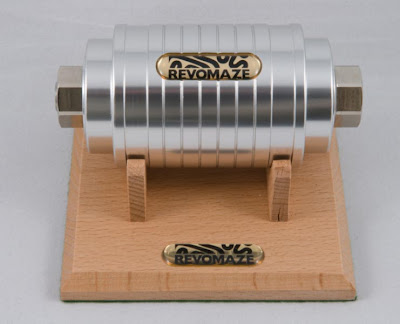 The Silver is broken into two main parts – separated by an impossible feature that’s been dubbed the ‘not-a-canyon’. The puzzle starts with a tricky first room, that sometimes lets you in and sometimes doesn’t – once you work out how to get into it consistently, you need to work out how, or rather where, to get out of it, and then there are all sorts of confusing little features designed to slow puzzlers down. Defeat all those (you’re talking days, rather than hours so far) and you find yourself in the ‘not-a-canyon’ – it looks like it has to be a canyon running across the entire middle of the maze, and there’s no apparent way to get around it or across it – and it stands in the way of you getting to the second half of the puzzle … getting past that is tough – a lot of good puzzlers have been stuck there, for a long time…
So let’s suppose you’ve found your way past the ‘not-a-canyon’ – you now find yourself in the area lovingly known as ‘the swamp’ – because all the weirdness that you’ve seen up until now simply pale into insignificance compared to the apparent randomness of the swamp. You can find yourself locked in a tiny room with no means of escape until, apparently miraculously, something changes and you find wide expanses to play in – you’ll try and map those areas only to find that they keep changing size and change for no apparent reason – but worst of all, once you get into the swamp, there’s non apparent way out.
By now most mortals are spending months on this puzzle, work out how to get out of the swamp, you head for where you know the exit is, only to find that Chris has introduced a lovely little feature he’s dubbed the ‘Dead End’ – go in there and you find yourself trapped, mere millimetres from the end … with no way to get there … and most folks end up back in the swamp, heartbroken.
An accurate map, allowing for all of the new features really is important, that’s my story, and I’m one of the 35 who’ve opened one of them, but you don’t have to take my word for it…
Lesson from the Silver – there is always a way out and everything matters!
Posted by allard at 22:13