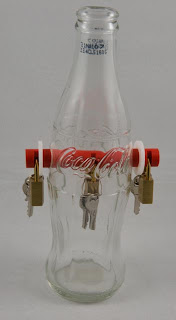 aka Bottle 3 Lock
I’ve always had a bit of a soft spot for puzzle bottles, so when I found a couple of interesting looking 250 ml Coke bottles on Sloyd’s web site, it didn’t take long to order one.

This one looks a little daunting at first: there’s a solid bar through the middle of the bottle with three padlocks fastened to it – each with a key or two hanging from the locked shackle … so far so good … the bother comes largely from the fact that the keys on the outside belong to the lock on the inside, and vice versa … usual rules apply – use what you have in front of you, only! Helpfully you’re instructed that the aim of the puzzle is to remove and replace the two white rings currently between the outside of the bottle and the two outer padlocks … i.e. dismantle and reassemble the entire thing … no short-cuts! 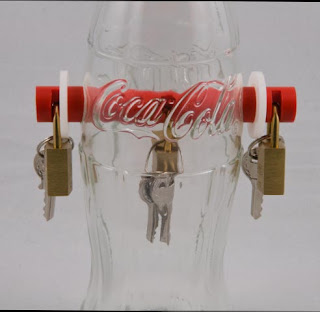 It’s another nice, honest puzzle … it uses recognisable everyday objects (albeit there are a couple of holes drilled through the bottle, I don’t tend to come across those very often, but hey…)  and there actually aren’t any tricks that only someone who’d seen one of them before would know about (there’s a big clue for you!).
A bit fiddly, but very satisfying – the sort of puzzle that will interest puzzlers and non-puzzlers alike, because it looks like it should be impossible – always a great hook.
Sloyd and William Strijbos both have them in stock…
Posted by allard at 20:38